People have traumatised but that shock is turning to outrage, writes Kitty Holland 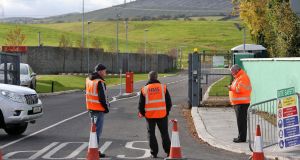 The entrance to the Dún Laoghaire-Rathdown Council Ballyogan depot car park, on the Ballyogan Road where a temporary halting site for the survivors of the Carrickmines fire is being set up. The survivors are expected to move in next Sunday. Photograph: Colin Keegan/Collins

Amid scenes of unspeakable sadness outside two churches this week, many members of the Traveller community were reluctant to express their anger.

“It’s not right to talk about it now,” said one older figure within the community outside the Church of the Most Holy Redeemer in Bray on Tuesday morning. “These children must be buried with dignity, but people are very angry. Things have to change. This can never happen again.”

At that stage, as mourners awaited five hearses carrying the bodies of Tara Gilbert (27), her partner Willy Lynch (25), their daughters Jodie (9) and Kelsey (4), and of Willy Lynch (39), negotiations over where the 15 survivors of the Carrickmines fire would be accommodated were ongoing.

The following evening, the bodies of Thomas Connors and his wife Sylvia, both 27, and their children, Jimmy (5), Christy (2) and Mary (5 months), who also died in the fire at a temporary halting site, on Glenamuck Road, were welcomed to the Church of the Ascension in Balally.

Just before Wednesday’s removal service got underway we learnt Dun Laoghaire Rathdown County Council had, in the face of opposition from residents, abandoned plans to use a council-owned site, at Rockville Drive off Glenamuck Road, to accommodate survivors on an emergency basis. The residents objected to lack of consultation on the issue, and didn’t believe council assurances that the site would only be used for six months.

The extended Connors family, who on Friday buried their loved ones in Wexford, return on Sunday to live in mobile homes on a car park on the Ballyogan Road – a site which council officials say is “not ideal”, having neither sewerage facilities nor running water.

While the Southside Traveller Action Group (Stag) welcomed the end to the impasse over where the family would live, other Traveller community leaders, such as Martin Collins, co-director of Pavee Point, described the outcome as “shocking”.

He has since then been taking calls from Travellers across the State, expressing “palpable anger”.

“People have been in shock, traumatised at the deaths, but that shock is turning to anger, deep anger. People who have never been involved in politics, or campaigning, are angry and saying things have to change. They are demanding it.

“I would say this tragedy and the events of the last two weeks have done more to politicise the community than any work any Traveller organisation has done in the last 20 years.

“There’s anger that 10 people could have been living in such danger. Anger that that family had been left to languish on that site for eight years. Anger that the council lacked the backbone to stand up to the Rockville Drive residents and copped out.

“Anger that they put the demands of settled residents above the needs of Traveller residents. Travellers see that as a fact and it sends out a very dangerous message – that local authorities will back down on Traveller accommodation when pushed.”

The community “don’t buy”, he says, the council’s argument that overriding the settled residents’ objections would have meant legal delays, further delaying works on a site.

“The council owns that field. They could have moved the residents’ cars blocking the entrance, if they wanted to. Local authorities have been well able to move with ruthless force against Traveller families when they wanted to move them, moving in the middle of the night to evict them by force, uprooting families, frightening children.”

David Joyce, barrister and Traveller, speaks too of the initial shock at the loss giving way to anger, particularly at the events around Rockville Drive. That 72 per cent of people in an Irish Times on-line poll supported the residents’ stance, “didn’t shock” him.

“But it sickened me. I think people in the [Traveller] sector, who have been working for 20, 30 years trying to counter the stereo-types, challenge the assumptions are frustrated. There’s going to have to be a lot of soul searching. Clearly there will have to be a change of strategy. We have to ask ourselves just what do we want to achieve.”

He says people are angry, but also fearful and depressed by events.

“It is extremely depressing that people are afraid of their living conditions and afraid to speak up about them because they might end up homeless. They feel powerless and that no-one cares.”

He says he would like to see a radical movement, such as the #BlackLivesMatter movement in the United States which emerged in response to the deaths of young, black men, apparently at the hands of police officers.

All agree there are some within the Traveller community engaged in criminality and anti-social behaviour, but argue the whole community cannot be held accountable for the actions of a minority.

Says Joyce:“I don’t go around robbing or intimidating people. Nor do my children. That is not my family’s values. But we don’t have our own police force.”

Collins too says: “We are not a parallel State. We do speak out about anti-social behaviour within the community but ultimately it has to be an issue for the authorities. We do have a role to play, but we need help with it.”

Minceirs Whiden, the Traveller-only forum, has also been receiving calls from Travellers – many of who have never been involved in any kind of activism – demanding a response. It is calling a protest, which it hopes settled people will join, outside Leinster House on Wednesday, at 1pm, calling for the provision of Traveller accommodation to be taken away from local authorities.

While he supports Wednesday’s protest, Joyce argues the community must embark on a “long-term protest”.