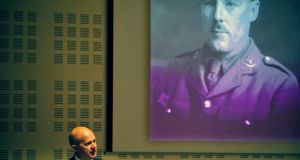 British ambassador Dominick Chilcott at the launch of The Irish Country house and The Great War in The National Library. Photograph: Aidan Crawley

The Irish and British governments have been as “good as their word” in ensuring the decade of commemorations is marked in a “spirit of historical accuracy and reconciliation”, the British ambassador has said.

Dominick Chilcott was speaking on the eve of the unveiling of the Cross of Sacrifice, at Glasnevin Cemetery, which honours the Irish who died in the first World War.

He said it would be a “magnificent tribute” to the vision of poet and politician Tom Kettle if the war was commemorated in a reconciliatory way.

Kettle had been a Nationalist MP and was in the Irish Volunteers. He went to Belgium to buy guns for the volunteers but, after witnessing German atrocities against Belgian civilians, he enlisted in the British army. He was killed at the Battle of the Somme in 1916.

Mr Chilcott was speaking in the National Library at the launch of The Irish Country House and the Great War, a book and CD of memoirs from 52 “Big House” families.

Among the families are the Killanins; the Cosbys, who host Electric Picnic; the family of Brendan Parsons, Earl of Rosse; and the family of Longford-born Sir Henry Wilson, the former chief of the Imperial General Staff, who was assassinated by the IRA in 1922. A relative of the singer Chris de Burgh is also included.

She said her father wanted to fight in the war but was deemed to be “too valuable” to the British in Ireland. He was staff captain to Maj Gen William Lowe, commanding officer of the British army in the Easter Rising, and took the surrender from the leaders, including his wife’s first cousin, Countess Markievicz.

Kevin Myers, who has spent decades raising awareness of the Irish who fought in the first World War, said he spent the summer of 1979 in the National Library researching the subject. He was told by a librarian “you must be sick and tired reading about those traitors”.

He said: “That was the culture of the time. No one thinks like that anymore.”

Mr Myers said those from the Big House were often subject to stereotype, especially the idea they were all Protestant: the reality was that many were of Catholic origin. He said the “twin pincers” of republican violence and the Land Commission “made life impossible” for many of the families involved.