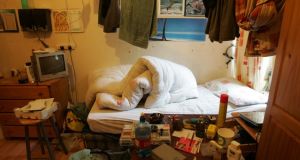 Hundreds of people – typically those who have taken legal challenges against the rejection of their applications – have spent seven or more years stuck in a system which almost everyone agrees is deeply deficient.

It was originally supposed to provide shelter for just six months. Today, asylum seekers in the State’s direct provision system spend an average of three years and eight months in conditions that are often bleak, overcrowded and unhygienic.

Inspection reports into some of these direct provision centres, published for the first time, provide a dismal snapshot of a system where families often have to live in a single room; are not able to cook for themselves and adults are not allowed to work, and where children are unable to play with any meaningful sense of freedom.

In total, just over 4,600 people – including more than 1,000 children – live in 34 accommodation centres spread across 17 counties. All the centres are managed by private contractors who received just over €62 million in State funding last year.

Under the direct provision system, asylum seekers are not allowed to work but receive a weekly allowance of €19.10 per adult and €9.60 per child.

Hundreds of people – typically those who have taken legal challenges against the rejection of their applications – have spent seven or more years stuck in a system which almost everyone agrees is deeply deficient.

The Reception and Integration Agency, which forms part of the Department of Justice, is responsible for the accommodation of asylum seekers while their applications are being processed.

It signs contracts with individual centres to provide food and accommodation to people seeking refugee status “to a standard which is reasonable having regard to the daily needs of asylum seekers”.

In some cases, residents were unable to access showers in their rooms due to issues with water pressure.

In other cases, caravans were found to have rotting floorboards, blocked emergency exits or fire alarms which weren’t working.

There were also isolated cases of overcrowding with more people than beds in some rooms, and corridors blocked with residents trying to dry clothes or store their luggage.

Fire safety
In all cases, contractors dealt with these issues - typically related to fire safety, food hygiene or health and safety issues – to the satisfaction of inspectors.
The agency says no centre has had its contract terminated and that it constantly engages with services to ensure value for money is being achieved and accommodation complies with standards of accommodation, bed-usage and health and safety obligations.

But, at the end of the day, these inspections are simply a snapshot of the physical conditions on any given day.

They do not hint at what conditions are like on day-to-day basis, or the mental toll of being stuck in temporary accommodation.

Mick Rafferty, along with his colleague, Patricia McCarthy, has delivered training in several direct provision centres over the past five years with the non-governmental agency, Partners in Catalyst.

He says the system is inhumane and has little doubt it will be the subject of a hand-wringing scandal in years to come.

“We have heard allegations of women and babies suffering from malnutrition and of suicides that are covered up.

“Residents in these centres are afraid to complain because they know they can be moved arbitrarily, far away from the contacts and supports they have built up.”

Dr Joan Giller has helped provide health screening in an accommodation centre for the past six years or so. She also feels it is deeply damaging.

“The system of direct provision in Ireland is an appalling abuse of the rights and liberty of people and should be abolished forthwith,” she says.

Alan Shatter, the Minister for Justice, has acknowledged the system’s failings .

While in opposition, he told an Oireachtas committee in July 2010 that it required a major overhaul.

He has since acknowledged that the system is not ideal, but has defended its continued use on the basis that it allows the State to provide a roof over the heads of those seeking protection.