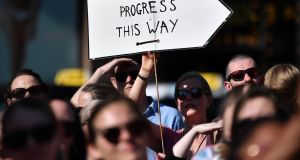 Campaigners are pictured during a rally calling for abortion rights outside Belfast City Hall on Monday. Photograph: Charles McQuillan/Getty Images. 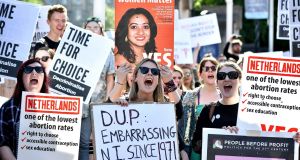 Campaigners are pictured during a rally calling for abortion rights outside Belfast City Hall on Monday. Photograph: Charles McQuillan/Getty Images.

Reproductive rights activists gathered in Belfast on Monday evening to call on the British government to legislate for abortion in Northern Ireland.

Buoyed by the repeal of the Eighth Amendment in the Republic, several hundred people took part in a rally outside city hall on Monday at which they demanded that prime minister Theresa May legislate for abortion in the North.

Ms May is being urged to legislate after almost 18 months without a devolved government in Belfast and following on from Friday’s vote to liberalise the Republic’s abortion regime.

Lucile Vanlerberghe (31), who is from France and is expecting a baby next month, said in the five years she has lived in Belfast she has been helping the “fight for decriminalisation of abortion”.

“It is completely crazy abortion is not available here, especially when you see the DUP saying they are part of the UK and have solidarity with England, ” she said. “But we don’t have the same rights as England and now Ireland is changing the law. Everyone should have the choice.”

Together for Yes activists from Drogheda, Co Louth, told the crowd they appreciated the support Northern activists had demonstrated in canvassing for the repeal of the Eighth Amendment in the Republic.

Briege Lynch (29), a marketing manager from Belfast, was among the Alliance For Choice volunteers to canvas in Drogheda and other parts of the Republic during the campaign.

She was at Dublin Castle on Saturday when the official referendum result was announced. “We are all sisters together,” she said. “Once they got their Yes their first thought was to look North.”

People attending Belfast’s Solidarity With Repeal - Time For Choice rally chanted: “Our bodies, our lives, our right to decide” and “One, two, three, four, we won’t be silenced anymore. Five, six, seven, eight, it’s time for May to legislate.”

They carried placards featuring pro-choice messages including ‘I am not a vessel’, ‘Decriminalise abortion’, ‘Free Safe Legal Abortion’, and ‘Mind Your Own Uterus’.

George Poots (15) from Belfast was at the rally with her brother and their mother.

“It is awfully unfair that people here should not be able to get an abortion,” she said. “At present they have to worry about travelling to England and I also think of the women who cannot travel...In the south it was a turning point, so it’s the start of a new campaign here.”

Amnesty International has previously called on the British government to act over Northern Ireland’s “Victorian-era abortion ban”. Abortion law in Northern Ireland is covered by the Offences Against the Person Act 1861 and the Criminal Justice Act (NI) 1945.

At present access to abortion is only permitted if a woman’s life is at risk or if there is risk to her mental or physical health that is long-term or permanent.

When the State introduces legislation allowing for abortion up to 12 weeks, which is expected later this year, Northern Ireland will be the only region in Britain and Ireland were a restrictive regime exists.

It is estimated that around three women travel from Northern Ireland to England for an abortion every day, while others risk prosecution by self-medicating with abortion pills.

People Before Profit MLA Gerry Carroll, whose party helped organised the Belfast rally, said the position in the North was unsustainable.

“There is a clear call for Theresa May to legislate,” he said. “Abortion should be decriminalised throughout and women should have control over their own bodies.”

The British government has so far declined to offer an official statement on the issue as it says abortion is a devolved matter and its focus is on getting Stormont back up and running.