Beggars on Ha’penny Bridge told to leave for anniversary

An event has taken place to mark the 200th anniversary of Dublin’s Ha’penny Bridge. It was the first cast iron bridge to be erected in Ireland and the only pedestrian bridge to be built over the Liffey for 184 years. Video: Bryan O'Brien 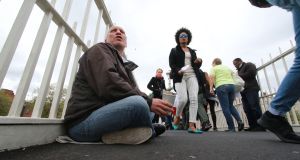 Simon Breeze on Dublin’s Ha’penny Bridge. Simon is homeless and was asked to leave the bridge on Thursday in advance of the anniversary celebrations. Photograph; Nick Bradshaw 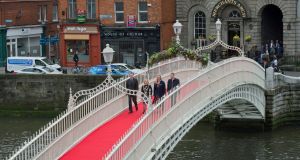 People who regularly beg on Dublin’s Ha’penny Bridge say they were told to either leave or be arrested, the day of the bridge’s 200th anniversary.

A red carpet was laid the length of the bridge and sprays of flowers garlanded across it, to mark its bicentenary on Thursday.

Photographs were taken of the Mayor of Dublin Críona Ní Dhálaigh walking across the carpeted bridge with descendants of the man who designed it and the mayor who commissioned it along with John Flanagan of Dublin City Council.

Simon Breeze (50) had been on the bridge from early on Thursday morning but was not in any celebratory photographs. Homeless for the past three months, he says he was sitting in the same spot as he was on Thursday, close to the southside of the bridge.

“The guys who were laying out the carpet and the guards, asked, ‘Would you mind moving off somewhere else while this event is going on?’

“What can you do? It was either that or get arrested, so we obliged. It was a historical celebration but we were shunted off.”

He says he has been in Ireland for six years, having grown up in Britain, and he lost his home after his relationship broke down.

“I couldn’t tell you how horrendous it is to be homeless. I’ve had bags taken. I’ve been beaten up. For the last few nights I’ve had a bed in the Peter McVerry Trust hostel in Aungier Street but I can’t get a ‘rolling’ bed [longer term]. You phone the freephone but the beds are nearly always full. It’s getting worse.

“Sometimes you get the Merchants Quay cafe and a mat to lie on. That’s always full too, with people who’ve been using drugs, drinking. I just thank God I don’t partake in all that.”

Further along the bridge, closer to the northern quays, Michael Cousins (35), from Tallaght, says he was “just told to clear off or be arrested” on Thursday morning by “fellas in yellow jackets”.

“We weren’t even allowed stay in the area and watch, just told to go away from this area altogether.”

A spokeswoman for Dublin City Council said it had been necessary to “clear the bridge of all pedestrians” to facilitate the photocall and walk, which lasted 15 minutes .