Jonathan Corrie (43), was sleeping on streets for five years before he died outside Leinster House 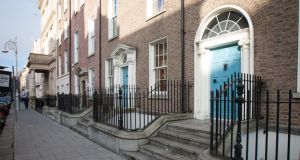 The area where Mr Corrie died just metres from Leinster House. He had struggled with alcohol and drug addiction. Photograph: Gareth Chaney Collins

Dublin’s homeless authority says repeated offers of accommodation were made to Jonathan Corrie, the rough sleeper who died just yards from Leinster House earlier this week.

The organisation said state-funded services made a significant number of interventions with him, including what it described as “holistic and assertive” on-street assistance.

“Repeated offers of emergency accommodation were provided, however, Mr Corrie did not avail of these, as was his right,” the Dublin Region Homeless Executive said in a statement.

Mr Corrie’s death, in the shadow of the national parliament, has sparked calls by political parties and campaigners for a major debate on the provision of homeless services in the capital.

Homeless charities say there are not enough emergency beds to cope with demand for places and have warned of future deaths as the cold weather sets in.

More than 160 people sleep rough in Dublin each night, according to official figures compiled last month. This represents a 20 per cent rise on the same period last year.

But the Dublin Region Homeless Executive says it has provided an additional 38 beds in recent weeks as part of a cold weather initiative. A further 88 are due to come on-stream before the end of the year.

These beds will be available until the end of March next year as part of an “emergency humanitarian response”.

Mr Corrie (43), originally from Co Kilkenny, had been sleeping on the streets of the capital for at least five years and was struggling with alcohol and drug addiction, according to charity workers.

Sam McGuinness of Dublin Simon said: “He was known to our service since 2009. We brought him to a mobile health clinic over a number of years and he was regularly in and out of emergency health services.”

A member of the charity’s rough sleeper team said: “He was a lovely and softly spoken guy who was always very appreciative of the support he was given. He was the reason I got out of bed at 5am each morning, to help people like him. He was a pleasure and will be sorely missed.”

But another homeless support worker painted a more troubled picture of Mr Corrie, stating: “He was a bit chaotic. He wasn’t easy to deal with. For instance, he once said he didn’t want to attend the health clinic because he thought he’d be ordered to stop drinking.”

A special forum on homelessness, meanwhile, is to be convened on Thursday by Minister for the Environment Alan Kelly.

It follows calls by Archbishop Diarmuid Martin - backed by Dublin Lord Mayor Christy Burke - who called for the “public summit” of all those involved in fighting homelessness.

Archbishop Martin said he was “very deeply concerned about a deeply divided Dublin where on the one hand there is rejoicing at increased spending over the Christmas period and on the other hand where the number of those homeless and hungry is actually increasing.”