Policies of austerity have driven people into the arms of xenophobic nationalist parties, says Jack O’Connor 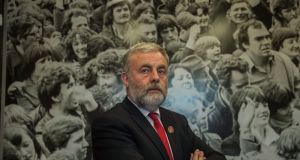 Siptu president Jack O’Connor: he urged parties and organisations on the left of Irish and European politics to put forward strategies that could reverse austerity and reinstate workers’ rights

Austerity policies imposed by centre-right leaders across the EU have devastated millions of workers’ lives and driven them into the arms of xenophobic nationalist parties, Siptu president Jack O’Connor has said.

He was speaking at a commemoration on Monday at Glasnevin Cemetery to mark the 70th anniversary of the death of trade union leader Jim Larkin.

He said parties of the right in Europe “could have saved millions of their citizens from destitution and despair by measures to offset austerity with a major public investment initiative”.

“Their insistence on rendering support conditional on soul-sapping austerity condemned countless numbers of EU citizens to unemployment, emigration and misery. Their brutal strategy has fundamentally undermined the legitimacy of the European project in the eyes of tens of millions of workers and young people.”

Mr O’Connor said all that was required was a more flexible interpretation of the EU’s Stability and Growth Pact. This would have allowed countries to disregard the expenditure of up to 3 per cent of GDP on productivity enhancing infrastructural investment and skills development.

Mr O’Connor urged parties and organisations on the left of Irish and European politics to put forward positive and productive strategies that could reverse austerity and reinstate workers’ rights.

He said social democracy was “severely discredited”. He said it “first forged the prospect of a better future for all before the first World War, led the fight against fascism in the 1930s and 1940s, and spearheaded a social Europe afterward”.

Social democracy “has burned a huge amount of its political capital in a desperate effort to mitigate the austerity agenda by participating in governments dominated by the centre-right, and has consequently ended up being blamed for a collapse that was not of its making”, he said.

“Others, on an increasingly fragmented left, seem content to be defined by reference only to what they are against rather than offering a vision of what they are for, or how it would work.”