Residents say concerns over food, hygiene and living conditions are not being addressed 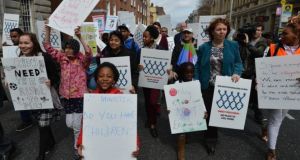 Asylum seekers, refugees and human rights supporters march from the Dáil to the Department of Justice last yeas. Residents at Athlone direct provision centre say they do not receive enough food for children’s lunches or dinners and that families are paying for basic items out of their weekly allowances. Photograph: David Sleator/The Irish Times

Asylum seekers in one of the biggest direct provision centres in the State are no longer accepting food in protest at conditions at the facility.

Athlone Accommodation Centre, a mobile home park which provides accommodation for more than 200 men, women and children, is operated by a commercial contractor on behalf of the State. Under the direct provision system, residents receive full board and accommodation and a weekly allowance of €19.10 a week.

Residents say ongoing concerns over food, hygiene and living conditions have not been addressed and that most asylum seekers have stopped accepting food since Tuesday. The protest is due to continue tomorrow.

In a letter to management on August 3rd, residents say they do not receive enough food for children’s lunches or dinners and that families are paying for basic items out of their weekly allowances.

In addition, residents claim they do not receive basic cleaning products such as baby wipes for children and washing powder for clothes, which they say are provided in other centres for families. They say they did not receive a written response and their main concerns had not been resolved.

“We are doing this for our children,” said one resident, who declined to be named. “Many of us have been living here for years and can’t feed our families properly. The attitude of some staff is very negative. We’re spoken to as if we’re children or even had food thrown at us. Enough is enough.”

The centre is operated by Aramark, a Dublin-based catering and facilities management company. It is obliged to refer all media queries to the Reception and Integration Agency, the State body responsible for managing the direct provision system.

In a statement yesterday, the agency said management and residents in Athlone had long co-operated in seeking to resolve “issues which inevitably arise in centres, particularly one of this size, and to date their joint efforts have proved successful.” It said there had been several engagements between management and residents since the latest concerns were aired.

On foot of this, it said menus had been changed, fruit juices were now being provided and school lunches were also addressed, with different types of sandwiches , it said.

“This type of local interaction has always been to the benefit of residents and management and is fully supported by the Reception and Integration Agency.”

The tension at the heart of the latest dispute appears to be linked to an open-air barbecue planned by management over the summer, at which visitors were due to be invited. Residents, however, objected to being “put on show” and said the event would give a misleading example of their way of life. The event was cancelled at short notice on foot of what management told residents were anonymous phone calls warning of violent disruptions. A residents group said it was unaware of any such plans and it did not condone any form of violence.