Asylum industry has become a cash cow for big business 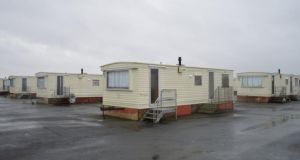 Asylum seeker accommodation in Athlone, Co Weatmeath: today, many of the companies providing shelter are large firms involved in the property, hospitality or catering business

It was introduced as a way of ensuring the needs of vulnerable asylum seekers would be met. But private hostel owners, rather than asylum seekers, have been the real beneficiaries of the direct provision system.

It was supposed to be a temporary solution. Instead, thousands of asylum seekers have spent years in a system in which they are unable to work or access further education.

Unpublished inspection reports into some of these centres provide a dismal snapshot of a system which shows evidence of overcrowding, poor fire safety practices and lapses in hygiene levels.

In all, the State has given almost €800 million to private firms for the provision of accommodation. All firms are contractually required to comply with legal requirements in relation to health, safety and food hygiene.

Today, many of the companies providing shelter are large firms involved in the property, hospitality or catering business.

Some have moved to re-register themselves as private unlimited companies in recent years, which means they have no obligation to file accounts. This shields their financial affairs from public scrutiny.

In addition, in some cases the beneficial owners or part-owners include companies in offshore jurisdictions such as the Isle of Man and the British Virgin Islands.

The agency said all companies were required to go through a tendering process and were contractually obliged to have valid, current tax clearance certificates. It said it could not provide details of individual contracts for commercial reasons.

However, it is possible to piece together how much individual firms have received from the Department of Justice through purchase orders and other official documents since the direct provision system began.

The biggest recipient is Mosney – formerly known as Mosney Holidays – which has been paid about €101 million for accommodating asylum seekers at the former Butlin’s holiday resort in Co Meath.

It became an unlimited company in 2012 and the firm’s shareholders include Louth businessman Phelim McCloskey and El Molino Hotels Ltd, Drogheda, Co Louth.

El Molino – whose secretary is Mr McCloskey – in turn, has two shareholders, the Isle of Man-based Sonning Unlimited, and Tymon Company Secretaries Ltd.

Company records for Mosney – before it became an unlimited company – show the firm was profitable. In the year to the end of October 2009 it made revenues of €8.8 million and a pretax profit of €122,916.

The firm also paid donations to Fianna Fáil worth €4,050 in 2009 and €5,500 in 2008. There is no suggestion that those donations had any link to the company winning the State contract.

The company became a private unlimited company in 2007. Accounts filed in the year prior to the change show it made a pretax profit of €1.5 million on revenues of €8 million.

Bridgestock is another major recipient of funds. It has been paid about €66.7 million for providing accommodation to asylum seekers in Sligo, Galway and Athlone.

It became an unlimited company in 2012. Prior to that, company records indicate it was profitable.

Bridgestock Ltd – then owned by Séamus and Kathleen Gillen from Tullamore, Co Offaly – had net cash flow of €6 million in the year to the end of June 2008, generating an operating profit worth €1.57 million. The company paid €1.12 million in rent to properties owned by the Gillens in 2008.

Millstreet Equestrian Services – whose registered address is the Green Glens Arena – provides accommodation under the direct provision system in Cork, Tipperary and Waterford.

The company, which has received at least €52 million from the State, includes Noel C Duggan and Thomas A Duggan as its directors. In 2010, it became an unlimited company. Its two shareholders are Isle of Man-based firms, Arabella Unlimited – which owns the vast majority of the company – and Tolosa Ltd.

Other major recipients of State funding include Shaun Hennelly, a businessman based in Galway (€24 million) and Cork-based Alan Hyde and Ted Murphy (€9.8 million).