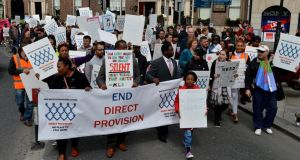 The commission said a process which should take six months may last between five and 10 years, “leaving families and children to struggle in cramped conditions with little money, privacy or access to work or education.”

It urged the State to publish legislation without delay to introduce a single application procedure for asylum-seekers and a right to appeal to an independent appeals forum.

The call is contained in the commission’s report to the UN Human Rights Committee, published today, in advance of Ireland’s hearing on its record in meeting the standards set out in the International Covenant on Civil and Political Rights. The hearing takes place in Geneva next month.

The commission said the State continued to have difficulty in carrying out effective and timely investigations that can lead to adequate redress for victims.

On the Magdalen Laundries inquiry, led by former senator Martin McAleese, the commission’s acting chair Betty Purcell welcomed the Taoiseach’s apology and the compensation system. However, these did not “correspond to human rights remedies”, she said.

“A prompt, thorough and independent inquiry with the powers to establish the truth and lead to timely remedies for victims is still outstanding,” said Ms Purcell.

The commission, which is in the process of being formed by the merger of the Human Rights Commission and the Equality Authority, said the proposed Garda Authority should be sufficiently independent and resourced to address the “deficits in accountability and oversight” of An Garda Síochána that had recently come to light.

In its report, the commission said it was important the Garda Síochána Ombudsman Commission (GSOC) be “insulated” from ministerial control by being made accountable to the Oireachtas and independent in its functioning and budget.

“The relationship between the Policing Authority and GSOC should be complementary and clearly defined so as to ensure the independence of GSOC,” Prof Mullally said.

From now on, GSOC should be empowered to consider all complaints concerning the Garda, including issues of national security, with appropriate safeguards. Complaints should encompass not only alleged misconduct by members of the force but also poor standards of service and alleged violations of human rights and equality principles.

Conditions in Irish prisons remain a “serious concern” for the commission. it welcomed moves but the State to use non-custodial sanctions as an alternative to jail, which it said should reduce chronic overcrowding and violence.

But Prof Mullally added that all assaults or deaths in prison should be documented and all investigations must be robust, independent and transparent.

The commission said it was concerned that the State had not yet ratified the terms of the Council of Europe Convention on Preventing and Combating Violance against Women and Domestic Violence. It was also concerned at the lack of analysis on the impact of measures adopted by the State against human trafficking.

The commission also reiterated its call for Travellers to be recognised as an ethnic group.

The UN Human Rights Committee, as the supervisory body to the Covenant on Civil and Political Rights, reviews all state’s compliance levels. Next month’s review in Geneva will be Ireland’s fourth.