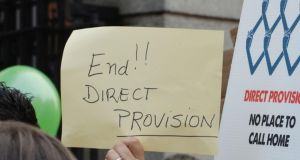 Asylum seekers: a representative for Nasc, the Irish Immigrant Support Centre, said the low number of complaints was a clear indication the current complaints system was “defunct”. Photograph: Alan Betson

Just four written complaints were received by the agency responsible for asylum seekers’ accommodation needs in the first 11 months of 2014, leading to further calls for the abolition of the current complaints mechanism.

The number of written complaints received by the Reception and Integration Agency (RIA) has fallen in recent years from 20 in 2011 to six complaints in the full year of 2013.

Although full-year figures for 2014 are not yet available, figures provided to The Irish Times under a Freedom of Information request showed that just four complaints had been recorded by the agency to November 27th, 2014, a year in which protests took place at a number of direct provision centres around the country.

The release of the figures follows a High Court ruling in November which found the current complaints handling procedure to be “deficient” and “unlawful”.

A representative for Nasc, the Irish Immigrant Support Centre, said that the low number of complaints was a clear indication that the current complaints system was “defunct”.

“If people are not using [the complaints mechanism] then clearly there is something wrong with the system,” she said. “We have been calling for the introduction of an independent complaints mechanism for years, but there is an urgency to that call now following the High Court ruling.”

She repeated the organisation’s call for the remits of both the Ombudsman and the Ombudsman for Children to be extended to include the direct provision system.

Aideen Roche, of the Limerick-based Doras Luimni, which last year supported residents protesting at living conditions in the Mount Trenchard centre in Foynes, Co Limerick, said it was not appropriate for the RIA to handle complaints made about it and its agents.

“A lot of residents don’t feel there is any point because it’s not going to someone who is going to look objectively at the issues raised.”

A spokesman for the Department of Justice said that a working group on the asylum process was considering a number of issues raised in the judgment, including the complaints process.