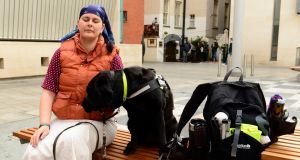 Rosemary Fearsaor-Hughes and her guide dog Quilla were placed in John’s Lane West hostel in Dublin a month ago after being attacked on the streets. Photograph: Cyril Byrne.

Almost 150 former rough sleepers face a return to sleeping on the streets as two Dublin hostels close in the next fortnight.

The 42-bed John’s Lane West hostel, which accommodates single people and couples, is to close on May 9th, while the 100-bed Brú Aimsir shelter, at the Digital Hub on Thomas Street, is to close on Saturday.

Focus Ireland and the Peter McVerry Trust jointly manage the John’s Lane hostel, which opened as part of the emergency response to rough sleeping in early 2015, following the death of homeless man Jonathan Corrie outside Leinster House. It was due to close last year but remained open as the crisis continued.

However, it must now close, says Focus Ireland’s director of advocacy, Mike Allen. The charity has planning permission to build 31 units of social housing on the site, which expires in December. “We have really pushed this as late as we can and if we don’t get a start, we’d have to start the whole planning process again.”

The Peter McVerry Trust is “confident” it can source alternative accommodation for residents, but a spokesman adds: “The entire property market is such that finding suitable accommodation is challenging.”

Brú Aimsir opened in December as part of the cold-weather initiative, to prevent involuntary rough sleeping.

In previous years, where there has been ongoing need for emergency capacity, cold weather beds have remained open – as was the case with the John’s Lane West hostel. However, the Digital Hub is not renewing the lease which expires on April 30th.

Among those facing a return to rough sleeping is Rosemary Fearsaor-Hughes (32) and her guide dog Quilla.

“We’ve been in John’s Lane West for the past month. It’s the first time I’ve had my own room in it feels like forever.”

Born in Galway and having lived in England and Ireland, she is Traveller-Romany, and has lost contact with her family from whom she is estranged.

She says she has “drifted” since her teens. Her sight has deteriorated since she was 18, due to macular atrophy.

She has “slept in almost every door in Grafton Street”. It’s difficult, she says, to get a hostel bed with a guide dog, but she was placed in John’s Lane West after being attacked on the streets.

Asked what she will do if she loses her bed, she says she will “go back to sleeping in the doorway of BT2, with Quilla”.