A network of ‘homes’, where children’s happiness was relentlessly destroyed

Opinion: It was said the boys would find ease in heaven as they had certainly done their purgatory on Earth 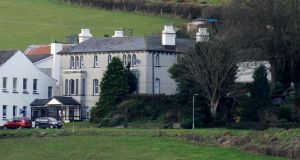 St Joseph’s Home,Termonbacca, on the outskirts of Derry. “Nobody ever put their arm around you and said ‘You are a good kid.’” Photograph: Trevor McBride

When I was nine or 10 my mother decided to try to make us one of these rosary families. We managed for months before surliness crept in and the project was abandoned. While it lasted, every decade was said for a particular intention, for success in an exam, recovery from illness, the repose of the soul of a relative or neighbour, occasionally for the souls of Hitler or Stalin or the Black and Tans on the grounds that some of these villains might be in purgatory rather than in hell and they needed the prayers more than anybody else.

But always, the fifth decade was for: “The home boys, God help them.” The home was St Joseph’s, Termonbacca, just outside the Brandywell area, run by the Nazareth nuns. This week, some of the boys have begun to give evidence in Banbridge to the inquiry under retired crown court judge Sir Anthony Hart. The inquiry – the largest-ever into child abuse in the UK – will hear from about 300 former residents at Termonbacca and other church-run institutions.

The suffering
The stories to be told echo the accounts of the suffering of children in church-run homes in the South and have gotten under way in the week of the European court’s judgment in the case brought by Louise O’Keeffe. Some aspects of our society have always been all-Ireland.

Even in conversation in the house or at the door, the home boys were spoken of in whispers. I recall it said that the home boys would find ease in heaven because they had assuredly done their purgatory on Earth.

You’d occasionally see the home boys, about 40 at a time walking two by two, en route to or from school. “Ah, the poor crayturs.”

Everybody knew. But the idea of “speaking out” didn’t occur. You didn’t talk back to the church.

Twenty years ago, I interviewed for the Sunday Tribune one of those now scheduled to testify, by then in a management position with a State enterprise in Dublin.

He described the physical abuse, the constant atmosphere of terror, the despair that would descend when you wet the bed and had to lie awake, sodden, waiting for the ritual humiliation of the morning.

“Nobody ever put their arm around you and said, ‘You are a good kid.’ Everything that was done was done to keep you subservient

“The bishop used to come once a year, at Christmas, which meant that from October we would be up until 11 at night rehearsing for his concert. Everything had to be perfect: songs, hymns, the Christmas crib. I dreaded it. Then he would come in all his splendour and we would all line up and kiss his ring, calling him ‘My lord’. The nuns pampered the bishop right, left and centre.”

Worst of all was deprivation of family. All his siblings, too, had been “taken into care” when he was a toddler. He had since discovered that his sisters had been held in the girls’ home, Nazareth House, where he’d gone in convoy to infants’ school.

“At some time I must have been sitting in the same classroom as one or more of them, but I was never told. When you put that alongside all the talk now of charity, of keeping families together, it doesn’t seem to bear thinking about.”

He had found some of them since, one in a mental institution. Most he never found.

Girls held in Nazareth House fared no better. Peggy Gibson was shipped to Australia, aged eight. She was told on the way that her name was now Margaret Teresa and that she had no brothers or sisters. But she remembered her older brother, Pat, who had been taken to Termonbacca. “I remember the way I would wait for him on Sundays to come and take me out. He would take me on a walk out the Letterkenny Road and lift me up and sit me on a wall, a wall that is still there to this day. He had bright red hair.”

From Australia, she searched for him for years. In 1978 she came back to Derry, knocked on the doors of Nazareth House and the bishops’ residence, but was told there were no records that might help in her search.

She hired a private detective who located him in Ballybay in 1992, six months too late. He had lived alone and kept himself apart, worked as a farm labourer.

“I had all these papers to show him, all the letters I had written and records of the people I had spoken to . . . I wanted to be able to say, ‘Look, see, there, I never gave up on you.”

Catholic evil
Stories of this sort will tumble out to the inquiry over the next 18 months, making it plain that the network of “homes” where children’s happiness had relentlessly, deliberately, systematically been destroyed, this archipelago of Catholic evil, had covered the entire island.

These things should be kept in mind when next we hear it said that the social ills of today can be explained by reference to loss of faith in the traditional institutions of moral authority. This is the reverse of the truth and an insult to the victims of an unforgiveable sin.