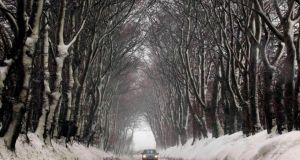 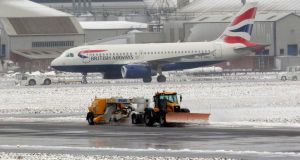 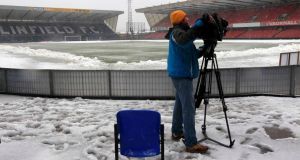 The snow covered pitch at the Windsor Park stadium in Belfast, where the World Cup qualifier between Northern Ireland and Russia this evening. Photograph: Cathal McNaughton/Reuters

Unseasonably wintry conditions saw widespread disruption across Northern Ireland today, with 100,000 homes left without power after overnight snow storms and winds of up to 80kph.

More than 70 schools and scores of roads, mainly in Co Antrim which bore the brunt of the hazardous conditions, had to be closed. The runway at the George Belfast City Airport has been shut twice for snow-clearing. Many flights from both the City and Belfast International airports have been delayed as well as ferry sailings from Belfast and Larne.

While some major routes such as the Glenshane Pass on the main Derry-Belfast road are impassable, other arterial routes into Belfast have been affected by failing traffic lights due to the power-cuts.

By this afternoon, Northern Ireland Electricity had restored power to more than half of those affected by supply cuts, leaving 40,000 still cut off. An NIE spokesman said conditions for engineers trying to repair fallen lines were “very, very challenging”.

He said: “We are used to being out in all sorts of conditions, we have all the right equipment, but this has been a tough one, especially in hilly areas, where we have seen three-foot snow drifts and very high winds.”

Further disruptionis predicted for the North tomorrow as up to 5cm of fresh snow is forecast along with gale-force winds, with the potential for more drifts, falling trees and making below-average temperatures feel even colder.

A spokesman for the PA weather centre said tomorrow would be “another horrendous day” for Northern Ireland, especially in the north and east, where up to 5cm of snow is predicted to fall on higher ground. In the south and west of the North, rain and sleet would bring further risk of flooding, he said.

BBC weather is predicting 30cm of snow to gather in hilly areas because of drifts from blizzard conditions and temperatures struggling to get above freezing.

Northern Ireland’s World Cup qualifying match against Russia, due to take place this evening, has been cancelled because of dire conditions at Belfast’s Windsor Park stadium and has been rescheduled for 3pm tomorrow, subject to a pitch inspection at 10.30am.

According to FIFA rules, games postponed due to extraordinary circumstances must take place within 24 hours of the original scheduled time.

The hitch is likely to have a knock-on effect, with Northern Ireland due to play Israel in another qualifier at Windsor Park on Tuesday.