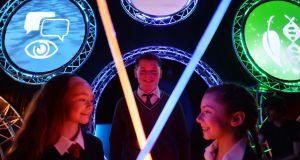 Bright sparks: Alexandra Kenny and Eve Healy from Santa Sabina Dominican College, whose project is on smog in rainwater, and Shane Curran (centre) from Terenure College with his project on automated logistics for couriers at the oung Scientist and Technology Exhibition. Photograph: Alan Betson/The Irish Times

Is seaweed good for fixing your foot blister? What can bird poop tell you about the bird? Can video games make you smarter? And are boys or girls better when it comes to lying?

All these questions and many more will be answered in the coming days as the BT Young Scientist and Technology Exhibition gets under way this morning at the RDS.

There are 550 projects on display across four categories, involving the efforts of 1,134 students who will take part over the next three days.

Students arrive this morning to set up their projects, and at 2pm today an opening event kicks off in the BT Arena. There will be music – loud music – and a video and performers, and President Michael D Higgins will be on hand to declare the exhibition formally under way.

The first round of judging starts at 3pm, and students will be encouraged to explain their projects and discoveries.

Alexandra Kenny and Eve Healy, second-year students from Santa Sabina Dominican College in Dublin, will describe their project which looks at what happens to rain when it picks up air pollution over a city.

Student Shane Curran of Terenure College is an old hand at the RDS, taking part for the third time with a software development project. He devised and wrote a programme that controls courier deliveries from pick-up and drop-off to final billing.

Now in its 52nd year and with independent Young Scientist spin-out events in Tanzania and in Abu Dhabi, the exhibition keeps going from strength to strength.

“The standard is very high and the students are dealing with big issues that we all face,” said Shay Walsh, managing director of BT Ireland.

The BT Young Scientist and Technology Exhibition opens to the public tomorrow.

1. Students from Clonakilty Community College, Cork, have a project on how the great pyramids were built and how maths may have featured in the effort.

2. Tree sap doesn’t sound very arresting, but students from Dominican College, Wicklow, have come up with a way to use sap to desalinate sea water.

3. Young scientists from Our Lady’s Bower in Westmeath have also found a use for a discarded product. They employ crushed egg shells to take petrol and diesel from water.

4. A student from Sutton Park School, Dublin, has large-scale ambitions in a project to design nothing short of a heavy stealth aircraft that can evade radar detection while increasing fuel efficiency.

5. “Smart nappies” is the result of a project by a student from Desmond College, Limerick. They provide feedback on the health of the child using non-invasive wearable technology.

1 Covid-19: One death and 363 further cases confirmed in State
2 ‘Insane’ gathering of hundreds of students in Galway condemned
3 Prepare for six to nine months of Covid-19 restraints, warn health officials
4 US election: Everything you need to know about Tuesday’s presidential debate
5 Speed and distance of Covid-19 droplets tracked by Mater researchers
Real news has value SUBSCRIBE