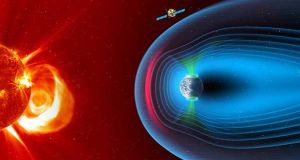 Space weather, first studied in the 1950s, has grown in importance with recent technological advances. It concerns the influence on the Earth’s magnetic field and upper atmosphere of events on the sun.

Such disturbances can enhance the solar wind, which interacts with the magnetosphere, with grave consequences for navigation. Space weather affects the satellites of the Global Positioning System, causing serious navigation problems.

Long before GPS, geomagnetic storms sparked off by solar activity interacting with the Earth’s magnetosphere were causing difficulties for navigators. As early as 1806, the explorer Alexander von Humboldt described the erratic behaviour of his compass during an auroral event.

Coronal mass ejections associated with sunspots can trigger storms in the magnetosphere. When sunspots are at a minimum, coronal holes can form, allowing the solar wind to escape. Space weather can also produce damaging surges in transmission lines, knocking out power; play havoc with aircraft avionics; and disrupt telecommunication networks.

The Space Weather Office of the European Space Agency (ESA) and the US National Space Weather Program provide forecasts of solar conditions and warnings of anomalous events. The mathematical models used to predict conditions on Earth are somewhat like the models used for weather prediction but the input data and observations are severely limited, and the models utilise the magnetohydrodynamic equations. Warnings of severe and extreme events, issued by ESA and the National Oceanic and Atmospheric Administration, are available on the internet.

A night to remember

Near midnight on April 14th-15th, 1912, an SOS message was sent out from the Titanic, giving its calculated position. RMS Carpathia, also guided by compass, steamed on a course to the reported location and, miraculously, found the lifeboats and rescued many passengers.

However, the wreckage found in 1985, at a depth of 3,700m (12,140ft), was 24km from the reported point. How could both ships make similar errors in location? An interesting article in Weather magazine by Mila Zinkova suggests the cause may have been space weather.

At the time of the disaster, the skies were clear, the sea was calm and there was no moon. Several sightings of the aurora borealis, a visible manifestation of geomagnetic disturbance, were reported. The sunspot cycle was near minimum in 1912, and reports from the British Antarctic Expedition on the fateful night were compatible with a coronal hole event on the sun.

Measurements at several geophysical observatories confirmed the occurrence of a strong magnetic storm. This could have affected compass readings on both Titanic and Carpathia. Zinkova argues that this caused similar errors on both ships, accounting for the miraculous interception of the lifeboats by the rescue vessel. The light from the aurora may also have aided the rescue operation.

Geomagnetic storms may severely disrupt radio communication. On the night of April 14th-15th, 1912, several ships in the north Atlantic reported communication problems. Some Marconi operators working in the vicinity of the disaster reported atmospherics and weak signals. Zinkova presented arguments that magnetic disturbances had a negative impact on the accurate receipt of SOS signals. This is also consistent with the official accident report.

Space weather and related geomagnetic storms affected several aspects of the Titanic tragedy: collision with the iceberg, navigation errors, communication failures and the rescue operation. Speculating more wildly, it is arguable that, had the sun been in a more settled state and the magnetosphere less agitated, the Titanic might have been on its intended course, and impact with the iceberg might have been avoided.