The Vikings beneath modern Dublin

Burials of warriors and their artefacts have left a rich world under the capital. A 15-year research project is about to reveal new truths 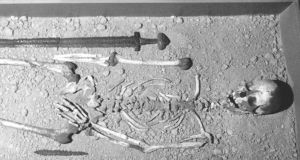 A Viking burial at Islandbridge, Dublin

The number of Viking warrior burials in Dublin is extraordinary in the Viking world, say archaeologists. Many were buried with swords and other Viking paraphernalia. A project cataloguing these burials, which began in 1999, is nearing conclusion. It will result in the publication of Viking Graves and Grave-Goods in Ireland, an 800-page tome.

A ninth-century Viking skeleton can be seen with sword and spearhead at the National Museum’s Viking exhibition; these were found in the War Memorial Park, Islandbridge, in 1934. Many earlier discoveries were poorly recorded.

“As a result of our new research, Kilmainham-Islandbridge is now demonstrably the largest burial complex of its type in western Europe, Scandinavia excluded,” says Stephen Harrison, who co-wrote the catalogue with museum director Raghnall Ó Floinn. He also recently co-wrote The Vikings in Britain and Ireland, aimed at the lay reader.

The sheer quantity of artefacts buried points to the importance and wealth of Dublin at the time. Most date from between AD 841, when a longphort was established, and AD 902. “Not every Viking was buried with artefacts. These are aristocratic burials,” says Harrison.

At least 59 graves were found in the Kilmainham-Islandbridge area between the late 18th century and 1934. Some still turn up; in 2004, a Viking sword and spearhead were unearthed in the War Memorial Park. Human remains of a young male were later found; analysis indicated a non-local who had spent his early years in the Scandinavian region.

“There is something phenomenal happening in Dublin,” says archaeologist Linzi Simpson. “The annals record these vast numbers of warriors coming to Dublin, and recent work is now matching that with the archaeology. We used to think the annals were prone to exaggeration, and maybe the Vikings weren’t so bad. But now there is a swing towards, ‘Jeepers, they were fairly catastrophic’.”

Their dead seem to have been buried on both sides of the Liffey and along the Poddle. Dublin was enclosed by a palisade running along the ridge from Dublin Castle to Christ Church, joining the two rivers.

Simpson excavated four Viking warriors in South Great George’s Street in 2003. Radiocarbon dating indicated that three burials dated from about AD 670-AD 882, and the other a little later. Strontium isotope analysis, which looks at chemicals laid down in developing teeth, indicated that two came from Scandinavia, while two likely grew up in a colony in Scotland. The site, just 200m from a warrior she discovered in Ship Street Great in 2001, was on the rim of the black pool, dubh linn, which gave Dublin its name.

The radiocarbon date gives Simpson pause for thought. The year AD 841 perhaps marks when the Vikings established Dublin, but this may have been just the first year when the military elite overwintered. Simpson says science will ultimately get to the bottom of this, but there may have been a Viking presence much earlier than AD 841. Indeed, they were first spotted off the coast in AD 792.

“They heard about this little island that was full of gold and people, and the raiders flooded in,” says Simpson. “Dublin becomes a trading capital of the ninth century.”

“Ireland is not on the periphery of Europe as Brussels might see it today. From a Scandinavian viewpoint, it is central to the approach to Europe,” says John Sheehan, University College Cork archaeologist. He is particularly interested in Viking silver hoards; the Vikings often used silver as a currency.

Analysis of silver artefacts using X-ray fluorescence shows it came from Islamic silver coins, Anglo-Saxon silver and continental sources, although some objects are a mix from melting. X-ray fluorescence bombards materials with high-energy particles to reveal their composition, but does not damage them.

However, most silver hoards from Ireland come from Irish sites, not Viking. “These hoards show that the Vikings were very much enmeshed here, and the Irish were part of their trade network,” says Sheehan. The Vikings likely traded with the Irish for native slaves.

But have the Vikings left their mark on the living?

Not much Viking DNA has been found by geneticists in Ireland. Studies in about 2006 looked at Scandinavian-type surnames and tested these people’s DNA. But some Irish people adopted Scandinavian names such as Olaf [Amláibh in Irish], says Cathy Swift at the University of Limerick.

She is involved in a UK-Irish project called Genes of Celts, Vikings and Normans, and is looking for Viking surnames that were included in townland names. Such families may have strong traces of Viking ancestry in their DNA, Swift believes.

“What we are now doing is testing the DNA of people with those surnames,” she says. “As an archaeologist, it is difficult to believe that the Vikings didn’t come in large numbers. A wide range of things not Irish suddenly appear.”

VIKINGS IN THE WEST: ‘EVERYTHING WE THOUGHT WE KNEW WAS WRONG’

“Everything we thought we knew about the Vikings was wrong,” says Eamonn Kelly, keeper of Irish antiquities at the National Museum. “The belief that Viking activities were concentrated on the Irish Sea area but largely absent from the west of Ireland is wrong, and it is simply not the case that there wasn’t a Viking presence in Ireland outside Dublin, Waterford, Wexford and Limerick. Vikings settled the west coast and integrated with the native Irish.”

One of their earliest raids was on Inishbofin in AD 795, which followed raids on Rathlin and Inishmurray.

“I believe these were exploratory raids along the north and west coasts with a view to assessing the prospect of establishing settlements,” he says.

Kelly saw evidence first-hand when excavating a distinctive Viking farmstead and burials at Truska in Connemara. There was another at Eyrephort, near Clifden, and a Viking fortress was excavated at Knoxspark in Sligo. He believes the Vikings made a land grab and set up way stations to serve ships sailing to Limerick. Viking armies defeated the Conmaicne Mara, the people who gave their name to Connemara. They also defeated the men of Umhall in Mayo, killing their king, but they were quickly assimilated.

“It was a win-win: Vikings came with new technology and introduced long-distance trade. And they integrated into the local set-up,” says Kelly.

An image of a Viking ship was engraved on the wall of Corcomroe Abbey in Clare, close to the grave of the O’Loughlins, whose 10th-century family name comes from the Irish word for a Norwegian. “This family is from a mixed Scandinavian-Irish background,” says Kelly. “This [intermarrying] probably happened along all along the coast.”