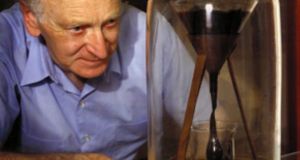 Later this year a big black blob of sticky pitch will plummet from a funnel and plop into a beaker. In one of the longest-running physics experiments, the slow-flowing pitch, under a bell-jar in the University of Queensland in Brisbane, will ultimately lose its battle with gravity, but it is not giving up easily.

At room temperature, pitch behaves like a brittle solid, shattering under a hammer-blow. But it is actually a highly viscous liquid, deforming slowly under the pull of the earth.

Since 1927 when the experiment was set up, just eight drops of pitch have fallen, all eluding direct observation. For the ninth, expected soon, the world is waiting. And the world is watching: a webcam is trained on the bell-jar, allowing continuous monitoring of the experiment. If you enjoy gazing at growing grass, you can tune in to what less imaginative souls regard as the most boring experiment ever.

The pitch drop experiment links three great Irish-born scientists. The first is William Thompson, later Lord Kelvin, born in Belfast in 1824, who was one of the leading scientists of the Victorian era. In 1887, Kelvin set up an experiment, similar in ways to that in Brisbane, to show that a small force can produce a large change in the shape of a substance over a long period. He used pitch, flowing imperceptibly but inexorably down a mahogany slide, to model the creeping motion of a glacier. The experiment is still in progress at the Hunterian museum at Glasgow University, 126 years after Kelvin began it.

The second scientist, applied mathematician Sir George Gabriel Stokes, was born in Skreen, Co Sligo in 1819. Stokes realised that to model fluids accurately it was essential to include the effects of internal friction or viscosity. The system of equations that he derived is the basis of modern fluid dynamics. In the case of highly viscous fluids, the equations reduce to a simple form representing what we now call Stokes Flow.

The third of our heroes is Osbourne Reynolds a physicist born in Belfast in 1842. Reynolds’ brilliant experiments showed how fluid motion changes suddenly from a regular or laminar form to more chaotic or turbulent flow as the critical value of a certain ratio is exceeded. This ratio is now known as the Reynolds Number. The highly viscous creeping flow named after Stokes corresponds to very small values of the Reynolds Number.

Pitch is estimated to have a value of viscosity a hundred billion times greater than water and the pitch drop experiment is an example par excellence of Stokes Flow. The Reynolds Number is tiny, something like one over 10 billion billion. The experiment involves processes with two widely differing time-scales.

The formation of a drop takes about 10 years, or say 300 million seconds. The fall takes about one third of a second, so the ratio of time-scales is about a billion. This multiple time-scale character greatly complicates the mathematical analysis of the problem.

The experiment is expected to continue for about another century, with drops at ever-increasing lengths. The eighth drop fell in November 2000 and the ninth is overdue, so keep an eye on that webcam (smp.uq.edu.au/content/pitch-drop-experiment ).