The bright future of weather forecasting 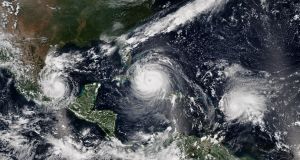 Accurate weather forecasting beyond a couple of weeks into the future may ultimately be doomed by the phenomenon of chaos, which implies that even if a system is said to be deterministic – nonrandom – its future may not be predictable. This is because predictive ability is limited by inaccuracies in observations of the current weather, and in the makeup of the weather models themselves.

But a technique known as ensemble forecasting has emerged over the past couple of decades, and is aiming to combat the problem. This kind of forecasting is based on advanced numerical techniques, taking advantage of the idea of the butterfly effect – where a small change in one initial state of a system can result in large differences at a later stage.

So, by changing a weather model’s initial conditions, and running multiple simulations, forecasters can generate a range of possible future weather scenarios. At Met Éireann, research into the application of ensemble forecasting is ongoing, helping to improve the accuracy of our next day and week-long forecasts.

These systems monitor the potential paths of hurricanes very closely, serving as an invaluable tool to decision makers in affected areas

According to Dr Alan Hally, a meteorologist at Met Éireann, who is working on the topic, the main strength of ensemble forecasting systems is their ability to represent the uncertainty which is inherent to any forecast.

He says that “by using a multitude of computer model setups – known as ensemble members – all slightly different from one another, we obtain a number of different possible future weather scenarios, instead of just one”.

That is the key point: forecasters generate a range of potential future scenarios. Then, by examining the data, they can gather a picture of what kind of weather is most likely to play out in the future. This kind of accuracy is valuable for the public and stakeholders alike, and can ultimately help save lives and improve economic performance.

The use of ensembles is especially applicable in the forecasting of storms and hurricanes. According to Hally, the European Centre for Medium-Range Weather Forecasts (ECMWF), based in the UK, design specific ensemble forecasting tools to track hurricanes and extra-tropical cyclones.

“These systems monitor the potential paths of hurricanes very closely,” he says, “serving as an invaluable tool to decision makers in affected areas.”

“Each member of the ensemble produces a predicted track of the hurricane path. When the paths predicted by the different ensemble members start to converge over one particular location – indicating high certainty – warnings are issued for people to evacuate and protect their property.”

Ensembles can also be used for more long term forecasts – not just weather alone – aiming to predict the seasons ahead. Dr Paul Nolan, at the Irish Centre for High-End Computing (ICHEC), points out that ensembles can also be made for climate projections.

According to Nolan, “climate and seasonal models are different from weather forecasting models in that they are used to predict changes in the mean state of the climate, as opposed to the evolution of day-to-day weather systems”.

In the future, weather, seasonal and climate forecasts will be improved by running very large ensembles – into the hundreds – of simulations at very high resolutions. But the current generation of supercomputers are not yet able to meet these computational requirements. In the book The Evolution of Meteorology, by Anthony Teague and Nicole Gallicchio, the authors write that “a general guide for modelling resolution and computer power is that for every increase in model power by a factor of two, the computing power needed to support such growth needs to be ten times as much”.

Researchers at ICHEC are working towards this goal through their involvement with a number of European projects. Nolan says that projects like ESCAPE and ESIWACE will work towards developing world-class, extreme-scale computing capabilities for European operational numerical weather prediction and future climate models.

We aim to predict large-scale patterns and regime transitions up to four weeks in advance, and global-scale anomalies up to a year ahead

He explains that “demonstrator models are currently under development which will work on computers that can perform 10,000 times as many calculations per second as those today, and deliver a forecast with a global resolution of 1 kilometre”.

“By developing a seamless approach,” he says, “we also aim to predict large-scale patterns and regime transitions up to four weeks in advance, and global-scale anomalies up to a year ahead.”

Located at the heart of Dublin’s silicon docks is the Irish Centre for High End Computing (ICHEC), Ireland’s national supercomputing institute. Here the centre’s aim is to conduct high performance computing and research data management techniques, for the economic and societal benefit of the country.

Since 2005 ICHEC has worked with over 1,400 academics and 150 companies in a range of projects and commercial partnerships, without which it would not be possible to conduct the weather forecasting and climate change simulations that help improve the quality of our lives.

According to Dr Paul Nolan, “at ICHEC, we are using global climate models to provide projections of future climate conditions based on different atmospheric greenhouse gas concentrations or, more broadly, different levels of radiative forcing of the climate system.”

“Climate models are some of the most complex models in all of science,” he says, “requiring powerful supercomputers in order to run large ensembles of multi-decadal simulations.”

But weather and climate research is just one aspect of the work done at ICHEC. Other types of projects conducted at ICHEC include those related to the training and education in simulation and modelling, software research, economics and finance, and space research.

Conor Purcell writes on science and nature; some of his other articles are at cppurcell.tumblr.com; @ConorPPurcell