Talking about the weather: Forecasting gets better and better

Technology and analysis improve weather prediction by a day per decade 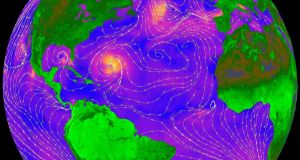 As soon as observations are available, computer predictions are subjected to rigorous verification procedures.

Weather forecasts are getting better. Fifty years ago, predictions beyond one day ahead were of dubious utility. Now, forecasts out to a week ahead are generally reliable. Careful measurements of forecast accuracy have shown that the range for a fixed level of skill has been increasing by one day every decade. Thus, today’s one-week forecasts are about as good as a typical three-day forecast was in 1980. How has this happened? And will this remarkable progress continue?

The European Centre for Medium-Range Weather Forecasts (ECMWF) is the world-leading weather prediction centre. It operates one of the largest supercomputer systems in Europe and has the world’s largest archive of numerical weather prediction data. Ireland has been a member of ECMWF since its establishment in 1975.

The illustration shows the skill scores for ECMWF forecasts at ranges of three, five, seven and 10 days ahead. All the graphs show sustained improvements over three decades. At each range, there are two curves, separated by a colour band. The upper curves are for the northern hemisphere, the lower ones for the southern hemisphere. Early in the period, the northern forecasts were substantially better. By the end of the period, skill was comparable in the two hemispheres, thanks to satellite observations and clever numerical algorithms for exploiting them.

The fundamental equations that govern the evolution of atmospheric motions are the Navier-Stokes equations. They are the mathematical basis of all computer models for weather forecasting. They have not changed over the past 50 years, but many other things have changed. Techniques for solving – or integrating – the equations have become more sophisticated and much more efficient. Methods of extracting information from satellite data now employ advanced mathematical tools. And the speed of computers has grown dramatically.

Computer power has been increasing by an order of magnitude every five years. This exponential growth means that over the 30 years shown on the graphs the power of computers went up one millionfold. More powerful computers allow us to use more accurate forecast models. Finer numerical grids and better representation of physical processes have resulted in increased forecast skill.

Weather satellite observations have revolutionised forecasting and future programmes will make such data even more abundant. The inexorable growth in computer power continues, so that global models will soon be able to represent convective clouds, simulating showers and thunderstorms explicitly. We may look forward to weather forecasts that are more reliable for longer ranges ahead.

But there is a limit: the atmosphere is turbulent, and tiny disturbances may grow over time to dominate the weather. Thus, small errors ultimately spoil the forecast, limiting the predictability horizon. Theoretical studies indicate middle-latitude weather should be predictable for two weeks or a little longer.

One of the strong drivers of progress in weather prediction is meticulous analysis of forecast errors. As soon as observations are available, computer predictions are subjected to rigorous verification procedures. Model deficiencies are quickly identified and, where possible, rectified.

Climate prediction is based on the same mathematical foundations, but climate models incorporate more components of the Earth system and the many interactions and feedbacks between them.

Climate change also depends critically on human behaviour, which may be prudent or reckless. Moreover, verification of climate change forecasts is problematical: we have to wait much longer to know how good a climate forecast really is.

Thus, the reliability of model forecasts of climate change is not guaranteed. Despite that, computer model predictions are the best indicators we have of the changing climate. We need to take them very seriously, while also doing everything possible to reduce the uncertainties.