The flower moon will be visible in Ireland by 9.15pm on Thursday and 10.50pm on Friday 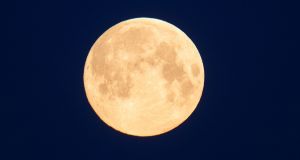 The last supermoon of the year, the flower moon, will be visible in Irish skies on Thursday and Friday night. Photograph: Dominic Lipinski/PA

A supermoon occurs when a full moon coincides with the perigee or its closest approach to Earth.

Astronomy Ireland has urged the public to look to the East to see the supermoon rising tonight.

“This is one of the closest full moons of the year, hence the name supermoon,” said David Moore, founder of Astronomy Ireland magazine.

“There will be a second phenomenon known as ‘The Moon Illusion’ which makes the already bloated full moon look even bigger to the human eye, perhaps twice as large as normal.”

There have been three supermoons already this year - which were visible on February 9th, March 9th and April 8th. This particular supermoon is known as the flower moon.

Thursday night is due to be mainy dry with clear spells but a few scattered showers may occur along Atlantic coasts. Some mist and fog patches will develop in calm conditions with lowest temperatures between 6 and 8 degrees.

Friday night is expected to be dry with clear spells though patches of mist and fog will develop in calm conditions.

Meanwhile, the planet Mercury should be easier to see this month, as John Flannery writes in his monthly column for The Irish Times.