While the solar eclipse may not be visible due to cloud cover in the Faroe Islands and beyond, retired US astrophysicist Fred Espenak, otherwise known has 'Mr Eclipse' says it will still be an 'interesting experience'. Video: Reuters

As tourists descend on The Faroe Islands in order to see a total solar eclipse all are hoping for one thing - clear skies. Video: Reuters 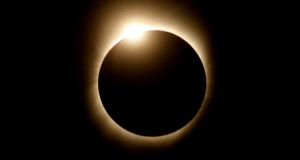 A solar eclipse in Varanasi, India, in July 2009. Ireland is set to experience up to a 95 per cent eclipse on Friday, though it is highly dangerous to look at the sun directly while observing the event. Photograph: Saurabh Das/AP

People have a chance tomorrow to see a rare phenomenon of nature as a near-total eclipse of the sun tracks across Ireland. It will become noticeably cooler, and sunlight will dim as up to 95 per cent of the sun will be blocked out by the moon.

“It is a fantastic spectacle of nature and we won’t see another eclipse like this until 2026,”said David Moore, editor of Astronomy Ireland magazine. “It is a very rare event and people are always fascinated about natural events.”

Doubt remains over the weather, however, with overcast skies possibly taking some of the excitement out of the eclipse. “A weak cold front will be coming down from the north, possibly making prospects a bit disappointing for Friday,” said Evelyn Cusack of Met Éireann.

“There is bound to be some cloud in the sky but we are hoping the front breaks up as it moves down,” she said. This could mean better viewing across the south coast.

A solar eclipse occurs when the orbiting moon passes in front of the sun to blot out the sunlight. In this case between 91 and 95 per cent of the solar disc will be blocked for Irish viewers and we will be under the shadow cast by the moon.

All of the island of Ireland will be affected, with the eclipse beginning at about 8.30am, reaching a maximum at about 9.30am and then moving away until the shadow departs by 10.30am.

The centre of the shadow will be further north over the Atlantic, but our experience of the eclipse will still be worth seeing, said Prof Peter Gallagher, a solar physicist at Trinity College Dublin. “It will get quite dark. You will see Venus appear in the morning sky by around 9.30am to the left of the sun,” he said.

It is highly dangerous to look at the sun directly and the Association of Optometrists has urged the public to “exercise caution” if attempting to view the eclipse. How to view and where to do it:

Safety is paramount when trying to observe the sun during an eclipse, and people should not take risks.

“It is very dangerous to look at the sun; do not look at it directly,” said Prof Peter Gallagher, based at Trinity College Dublin.

Do not attempt to use ordinary sunglasses, even very heavy ones, nor improvised methods such as candle-blackened glass.

People should also avoid trying to take “selfies” during the eclipse, said Patricia Quinlan, an eye doctor and spokeswoman for the Irish College of Ophthalmologists. A person might be put at risk lining up a selfie on their phones, she said.

“The safest way to view it is with a pinhole projector,” Prof Gallagher said.

People are advised not to use their home telescopes to view the eclipse.

“If you look into a telescope pointed towards the sun you could be blinded before you could blink,” warned David Moore, of Astronomy Ireland.

Parents with children should prepare a pinhole projector and avoid taking any risks using any other viewing method.

Trinity College Dublin, in Front Square. There will be telescopes and free access to “eclipse glasses”.