So what is the exact time? Precision devices count it down

New year to be rung in with atomic clocks, which are accurate to a millionth of a second 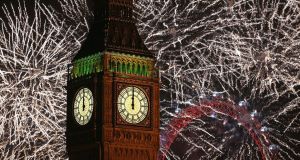 Big Ben strikes in the new year on January 1st in London – or is it? Photograph: Getty Images 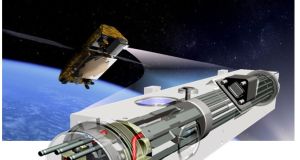 Do you know what time it is? Not approximately, but exactly what time it is? Timing for the first dong of the new year will ultimately come from super-precise atomic clocks, accurate to about one second out every few million years.

Compared with our endless preoccupation with the passing of time, the need for exact and standardised time is new. Some of our ancestors marked the turning of the seasons in Newgrange, while the ancient Egyptians had shadow clocks. These days we count time to the millionth of a second, and time is the most accurate unit of measure we have.

Yet, in the 1800s, clocks would have chimed in the new year at different times in Ireland. The sun rises about 11 minutes earlier in Dublin than Galway, whereas clocks set using sundials on the east and west coast run 11 minutes apart.

Such discrepancies mattered little until steam engines and train timetables made it obvious that clocks needed to tick in sync from one station to the next. However, differences between sundials and clocks also became more apparent. A sundial runs five minutes slow in spring, then speeds up, slows, speeds and slows again toward the year’s end. The gaps are because Earth does not keep uniform time; its north- south axis is tilted and its orbit is not quite circular.

The “equation of time” (google it) allows you to fix the discrepancy. “It is a combination of the two effects, and then you add it up by hand,” says Dr David Malone, an expert in wireless networking and time enthusiast at Maynooth University. He says time-discrepancy led to new case law when, in 1858, a defendant turned up before 10am local time in Dorchester, only to discover the case had started 10 minutes earlier, at 10am London time, and the judge had ruled for the plaintiff. After this, legal time was set as local time, much to the displeasure of the railways.

This was resolved in 1880 when Ireland united its time with the Definition of Time Act. Time in Britain was standardised to the Royal Observatory in Greenwich, London, averaged out using the equation of time, hence Greenwich Mean Time (GMT). Ireland ran on its own time, with midnight striking here 25 minutes and 21.3 seconds after Britain. Dublin Mean Time (DMT) was calculated at the Dunsink Observatory by studying the stars.

“You got the best pendulum clock of the time and set it by observations made at night,” says Luke Drury, a physicist at the Dublin Institute for Advanced Studies, which has run Dunsink since 1947. The time was sent via telegraph cable to a series of slave clocks in the GPO, the Ballast Office (which dropped a large “timeball,” as recounted in Joyce’s Ulysses), Bank of Ireland on College Green and Trinity College Dublin. The only surviving clock sits at the stairs of the Museum Building in Trinity.

Dublin time ended in October 1916, when Irish clocks went back just 35 minutes for winter time. This was not the end of our struggles with time. Atomic clocks arrived in the 1950s and their seconds were set by looking at a century of past data.

Tonight, the precise time of midnight will come from a network of these atomic clocks in national labs around the world. The atomic clocks rely on the frequency of microwaves from an atom of caesium, a metallic element. There is no one master clock, but a consensus on time is reached: Time International Atomic (TIA).

Atomic clocks can record time with 17 decimal places, accurate to a billionth of a second (a nanosecond), and newer clocks count in trillionths of a second (using ytterbium or strontium). Yet this year we added a leap second. On the last minute of June this year, we had 61 seconds instead of 60. “There is debate about whether this is a good idea or not,” says Malone.

So why do it? While atomic clocks tick away, astronomers are looking far out into space to watch star movements. An international body in Paris compiles these observations, and figures out which way Earth is facing in space. This sets the most accurate time – and mean time – for noon. Alas, this does not agree with atomic clock time. The rotation of Earth has slowed since the atomic second was decided in the 1950s, and a leap second is needed about every 18 months.

“It is the subject of intense debate, because we have these clocks which tell very, very accurate time, and then we correct this time to match the wobbliness of the Earth,” says Malone. The compromise time, to get UTC (Co-ordinated Universal Time), is there to keep our atomic clocks linked up with the direction the Earth is facing. The first leap second arrived in 1972, and there have been 26 added so far.

Malone says a lively debate continues at the International Telecommunications Union about whether to ditch the leap second and allow time to creep ahead of the Earth.

GPS (global positioning system) is a network of about 30 satellites. Multiple satellites send a signal at the speed of light to a GPS device, which calculates how far away each satellite is and so computes position. Distance is based on the time it takes messages to arrive, which requires precise atomic clocks on the satellites.

This year Nasa will kick off plans to set up GPS in deep space. Central to this are miniaturised atomic clocks that are 10 times better than today’s ultra-precise atomic clocks. A demo unit will be launched to Earth orbit in mid-2016. The plan is for spacecraft, capsules and landers to signal to satellites in deep space and so navigate more precisely and independently of signals from Earth.

The Deep Space Atomic Clock precision has been worked on until it drifts no more than one billionth of a second in 10 days. Twenty years of work has gone into improving and miniaturising a mercury-ion atomic clock at Nasa, preparing it for the harsh conditions in space.

Meanwhile, the European Space Agency is set to make use of two satellites that were accidentally launched into the wrong orbit. The satellites were launched for a European GPS system called Galileo, but went into elliptical orbits, not circular.

A planet’s gravity bends the fabric of space-time, and the atomic clocks on board these wayward satellites will be used to test more accurately Albert Einstein’s general theory of relativity.