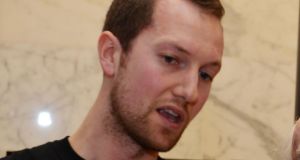 “My nightmare about [Mars One] is that people continue to support it and give it money and attention - and it then gets to the point where it inevitably falls on its face,” Dr Joseph Roche of Trinity College told Medium magazine. File photograph: Alan Betson/The Irish Times

An Irish man who is among 100 finalists for the Mars One space mission has claimed the project is dangerously flawed and will inevitably fail.

Dr Joseph Roche of Trinity College Dublin has been whittled down to the final 705 out of 200,000 hopeful candidates for Mars One, a Dutch not-for-profit group hoping to beat a number of government space agencies to send 300 people to live on Mars.

“My nightmare about it is that people continue to support it and give it money and attention - and it then gets to the point where it inevitably falls on its face,” Dr Roche told Medium magazine.

The Trinity College assistant professor said the secretive selection process used to whittle down candidates for the final phase of the multi-billon dollar project is hopelessly flawed.

He voiced grave misgivings over how final stage applicants are ranked on a points system which rewards those who manage to raise the most income for the Mars One project, as well as those who purchase official merchandise.

According to Dr Roche, who holds a PhD in physics and astrophysics, nowhere near the purported figure of 200,000 people have applied for the opportunity to spend the rest of their lives on Mars as part of a scientific experiment, and says the real figure is 2,761.

Backed by Dutch entrepreneur Bas Lansdrop, Mars One had set a goal of seeing humans inhabit the red planet by as early as 2025.

However, concerns have been raised over the viability of the such colonies given the organisation’s lack of financial backing.

The Trinity Science Gallery worker criticised the amount of interaction he has had with those conducting the selection process, saying an application form, video and 10-minute Skype call is “just not enough info to make a judgment on someone about anything”.

Despite his unhappiness over how things are being handled, he has not yet indicated any firm intention to drop out of the running for the proposed 225 million kilometre journey.