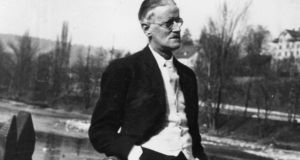 Tomorrow we celebrate Bloomsday, the day of action in Ulysses. Most of us regard Joyce’s singular book as a masterpiece, even if we have not read it. In contrast, Finnegans Wake is considered by some as a work of exceptional genius, by others as impenetrable nonsense.

Over 100 works of world literature were analysed in this way by a group of scientists at the Institute of Nuclear Physics in Krakow, Poland, and their report was published in the prestigious journal Information Sciences. They undertook a detailed statistical analysis of sentence length in a large collection of books in several languages, ranging from Shakespeare to Twain and Tolstoy to Joyce. The study revealed clear evidence of recurring patterns at scales ranging from a single sentence to an entire book. The most complex work was Finnegans Wake, “the absolute record in terms of multifractality.”

Fractals are mathematical shapes that have been used to model patterns that repeat on many different scales. Looking at a coastline map, we cannot tell the scale; a fractal coast looks similar at all scales. As the map is enlarged, more details appear, but the general character of the coast remains unchanged over several orders of magnitude. This self-similarity is typical of fractals.

Fractals can be seen in frost patterns on a window, in the clouds above us and in galaxies in space. Fractals are complex, but more complexity results when many fractals are irreducibly interwoven into structures called multifractals. A multifractal is not simply a sum of fractals: it cannot be divided to yield the original components, because the way they interweave is fractal in nature. In a sense, it is a fractal of fractals.

All the literary works showed self-similarity in terms of sentence length variability, but some had more intricate structures, the most complex being stream of consciousness narratives such as Ulysses. The structure of Finnegans Wake was “virtually indistinguishable from a purely mathematical fractal”. Of course, the fractality of a literary text can never match the ideal: a mathematical fractal can be magnified interminably while the number of sentences in a book is finite.

The spread of fractal dimension provides an index of complexity. The highest complexity index (0.74) was that of Finnegans Wake, with its exploration of the mental labyrinths of the dream state. Joyce’s Ulysses merited special attention: the analysis showed convincingly that the novel splits into two parts. Part I (episodes 1 to 10, with index 0.08) is essentially monofractal. Part II (the remaining eight episodes, with index 0.47) is multifractal in character. It would be interesting to speculate on factors in Joyce’s life that may have contributed to this dichotomy of style.

Irish novelist Eimear McBride was unsurprised that stream of consciousness novels were the most fractal: “Such writing is concerned not only with . . . content, meaning, aesthetics, etc . . . but engages with language as the object itself.” Given the connection between symmetry and beauty, “finding works of literature fractally quantifiable seems perfectly reasonable.”

It is said that Joyce wrote the Wake “to keep the critics busy for 300 years”. Judging from the Polish study, he is still on target to reach this goal.

Peter Lynch is emeritus professor at the School of Mathematics and Statistics, University College Dublin. He blogs at thatsmaths.com