‘I accidentally noticed that copper sulphate solution dropped on salt, instead of being blue, which it normally is, was green’ 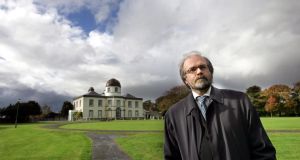 Prof Luke Drury, president of the Royal Irish Academy, who won the Young Scientist of the Year in 1969. Photograph: Brenda Fitzsimons 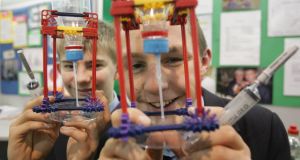 In a long career, Royal Irish Academy president Professor Luke Drury has amassed no shortage of scientific accolades so it’s a measure of the esteem in which the top prize at the Young Scientist Exhibition is held that it’s listed among his honours on the RIA website.

“You would think you’d forget these things but it’s pretty firmly ingrained in my memory,” says Drury of his success in 1969. In the tradition of scientific discovery, his project came about through a combination of chance and curiosity. “I accidentally one day noticed that copper sulphate solution dropped on salt, instead of being blue which it normally is, was green. I got curious about it and started experimenting and basically then tried to build an instrument to actually measure the effect and that’s what won me the prize.”

In terms of his career, the achievement “smoothed the path a bit” but he knows he would have been a scientist regardless. After winning the prize he went on to study experimental physics and pure mathematics at Trinity and later undertook a PhD in astrophysics in Cambridge. In 1986 he was appointed to head the astrophysics section of the School of Cosmic Physics in the Dublin Institute for Advanced Studies.

Drury remembers the first Young Scientist Exhibition 50 years ago in the Round Room of the Mansion House and says the standard has remained high. “You see that in the results when we send people to Europe, ” he says. “These people actually have what it takes to be scientists.”

Among those who went on to succeed at the European contest for young scientists were Niamh Mulvaney and Breda Maguire, who won the top prize in Dublin and then Oslo in 1986 with a project titled Focus on the Viola Tricolour-an Indepth study on Bull Island. “It was a great year,” Mulvaney recalls. “The highlight of my life”.

She and Maguire later studied botany at Trinity. “I was actually the first person in my family to go to college,” she says, adding that she continued on to PhD level. She has since moved from Dublin to Galway and in the last few years has been at home, looking after her five children. “I’ve just gone back to study in NUIG to do a diploma in medical devices,” she says.

A more recent European success came from John D O’Callaghan and Liam McCarthy with their development in 2009 of a convenient test method of somatic cell count and its importance in milk production.

“The Young Scientist had a big impact on both of us,” says O’Callaghan. “It’s a great event at such a young age. When you’re 13, 14, 15 you don’t know what you want to do when you’re leaving school so definitely when you compete in the competition it opens up doors for you and you see different roads you can go down.”

The road he chose was biomedical engineering in Cork Institute of Technology while McCarthy opted for biotechnology in DCU. They hope to develop their project further “when we have a bit more time on our hands,” says O’Callaghan.

Ciara Judge, one of three schoolgirls from Kinsale Community School, Co Cork, who won in 2013 has also been busy. “It’s been hectic but it’s well worth it,” she says of the 12 months since her win. On her diary for the coming year is an appearance at the Accenture breakfast for International Women’s Day, engagements in Brussels and London as well as a trip to CERN via Paris.

“We’ve had so many opportunities and we even have more lined up for 2014 so the excitement is never really going to stop, or so it seems anyway.”