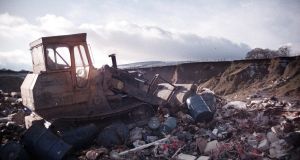 About 350,000 tonnes of biodegradable municipal waste have been loaded so far this year into the seven landfill sites that have reached their annual licensed capacity. 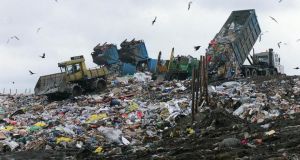 About 350,000 tonnes of biodegradable municipal waste have been loaded so far this year into the seven landfill sites that have reached their annual licensed capacity. Photograph: Alan Betson

Emergency measures have been invoked to ensure that the household waste we generate every day will not be left uncollected at the kerbside in the run-up to Christmas. Black bags pulled open by birds and cats would hardly have served as a decorative addition to the seasonal cheer.

It appears that the seven landfill sites currently in operation in Wicklow, Kildare, Galway, Meath, Carlow, Mayo and Monaghan have already reached the planned limits set for them by the Environmental Protection Agency (EPA) and local authorities.

This suggests Ireland has insufficient landfill space to handle the approximately 350,000 tonnes of biodegradable municipal waste loaded into these dumps during 2016.

The authorities do not accept this, with Bryan Doyle, chief executive of Wicklow County Council, saying the gates at the landfills will open once again from January 1st.

There is also plenty of capacity at centres such as the Drehid Waste Management Facility run by Bord na Móna in Co Kildare, and the new East Galway Residual Landfill Site, which will not be fully up and running until next year.

The problem it seems is that the annual tonnage limits reached their maximum this month rather than at the end of the calendar year.

The possibility of bins being left uncollected crystallised on November 11th when the three regional waste-management planning offices issued a report to local authorities saying available landfill space had been used up for the year so there was nowhere to put the waste from now until the new year.

This of course was not on and the Department of Environment, the EPA, the three regional offices and the local authorities met to work out an alternative to refuse in the streets and fly-tipping on every byroad.

Their decision involves allowing the Ballynagran landfill in Co Wicklow and the Knockharley landfill in Co Meath to exceed their EPA licence limits on a temporary basis until we are into 2017 and the weighing scales are reset to zero.

The three waste-planning offices represent catchments including Southern, Eastern-Midlands and Connacht-Ulster. They plan how Ireland will dispose of its municipal waste and so know better than anyone else where we stand in terms of current and future landfill capacity.

Underlying this is the Government’s own waste policy and planning, which in turn reflects demands set by the European Union and by our own legislation on waste.

The current waste-management plan says half of all municipal waste will be sent for recycling by 2020 and Ireland will be sending no unprocessed municipal waste directly to landfill by the end of this year due to better recovery and reprocessing.

A recent EPA review of the state of Ireland’s environment noted that more residual waste is now recovered for use as a fuel than disposed of to landfill. The current and future focus is on waste prevention, reuse, maximising recycling and waste as a fuel to replace fossil fuels.

We also export a great deal of our waste for incineration abroad, a task overseen by the Dublin City Council-based National Transfrontier Shipment of Waste Office. In 2014, we sent 560,000 tonnes of waste abroad for use as an alternative fuel.

The quick fix by the EPA averted a pre-Christmas waste crisis and things will fall back to normal in January, but it would be optimistic to believe that all our problems are over. On paper we have plenty of capacity but our expanding economy is generating extra waste and a proportion will continue to be for landfill.