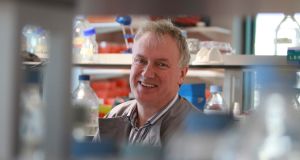 Prof Luke O’Neill is happy. This is not unusual: the biochemistry professor is known for his ebullience. But there’s an extra dimension to the good humour these days.

Why? O’Neill has recently become a fellow of the Royal Society. It’s an honour bestowed on up to 52 people each year on the basis of excellence in science, and of the roughly 1,600 fellows and foreign members, about 80 are Nobel laureates. “It’s like a lifetime achievement award; it means your work has been deemed influential,” says O’Neill.

In his case, that work has centred on the biochemical players and pathways that underpin our immune system, with a focus on the molecular triggers, brakes and cascades that fight off infections or drive chronic inflammatory conditions such as rheumatoid arthritis.

“The immune system is very complicated, and we are trying to find the component parts involved,” says O’Neill, who is professor of biochemistry at Trinity College Dublin. “My career has been involved in discovering some of the key component parts, and then if you know what the parts are you might [target] them, and this impacts on disease.”

Having spent time in London and Cambridge, O’Neill established his own research team at Trinity in the 1990s, around the time scientists were having a rethink about the immune system. The “adaptive” system was well known: it raises antibodies against invaders and uses them to target infectious agents for destruction.

But there’s another wing based on cells and receptors called the innate immune system. Its power had been relatively overlooked until some major discoveries, including a group of molecules that O’Neill worked on called Toll-like receptors. These TLRs are studded on the outside surface of immune cells and, when activated, they trigger an infection-fighting process called inflammation.

“Inflammation is both a blessing and a curse,” says O’Neill. “On the one hand, inflammation is a great way of killing off infections. But if you have chronic inflammation it is linked to tissue destruction and all sorts of chronic diseases like rheumatoid arthritis, heart disease and even diabetes and cancer. Understanding the processes of how inflammation develops can give us insights into inflammatory disease.”

Working with Andrew Bowie, O’Neill discovered that viruses can block this “innate” immune response, and with Kate Fitzgerald and Eva Palsson-McDermott he discovered that a protein in called Mal in cells was a key switch and volume control for turning inflammation on.

“These discoveries brought whole new perspectives on the innate immune system,” says O’Neill. “And they have been a foundation for further research to show how the molecular systems work. I’m still working on unpicking the pathways that control our metabolism and immune system, because they are fundamental to how our bodies work in health and disease.”

Earlier this summer, O’Neill spoke at a conference at the Royal Society, along with the other incoming fellows, including physicist and broadcaster Prof Brian Cox, mathematician and author Prof Marcus du Sautoy and Prof Anne Glover, who was the first chief scientific adviser to the president of the European Commission. “People stood up and talked about their own work. It was everything from volcanoes to gene editing to black holes to immunology,” says O’Neill.

The new fellows also got to sign their names in a book, which for O’Neill was a high point. “You see Robert Boyle’s signature there – he is known as the father of chemistry – and Isaac Newton’s signature is there, too,” he says.

While O’Neill is not the first person from Ireland to become a fellow of the Royal Society, he stands out as one of few life scientists to receive the honour for work carried out in Ireland. “That is what I am proudest of: that Ireland can carry out work at this level,” he says.

O’Neill credits state funding, and particularly Science Foundation Ireland, for giving him the freedom as a young researcher to develop his research. But he cautions that Ireland needs to continue to support young researchers. “Keep putting the needle back towards outstanding science, and make sure the supports are there for young people to establish their research groups in Ireland,” he says. “That will pay off in the longer term by keeping excellent scientists here.”

As well as making fundamental discoveries in the lab, O’Neill has forayed into industry: he is a cofounder of Opsona Therapeutics, which is developing potential therapies for transplants and cancer based on TLR biology, and he has brought some of his team to GlaxoSmithKline in the UK, where he works with them to help discover new medicines.

“The real thrill is that if you get that knowledge from curiosity and lab work, it might lead to new treatments for diseases that afflict humanity,” says O’Neill, who marvels at the complexity of biology and at the rise of immunology as a potential means to target therapies. “Immunology is at a very exciting time. We are seeing some wonderful findings and it is even emerging in cancer therapies. So I won’t be quitting the immune system any time soon.”

As brain studies go, it’s one of the most celebrated. In 2000, researchers at University College London examined changes in the brain as London taxi drivers acquired “The Knowledge of London” and learned to navigate the city’s highways and byways.

The scientists saw that the structure and function of a key part of the brain for memory formation, the hippocampus, changed as taxi drivers got to grips with the complex urban layout.

The taxi studies were led by an Irish neuroscientist, Prof Eleanor Maguire, who this year became a fellow of the Royal Society.

“It’s overwhelming, but a great honour,” says Maguire, who studied at University College Dublin. Today she is a Wellcome Trust Principal Research Fellow and deputy director at the Wellcome Trust Centre for Neuroimaging at UCL, and she continues to work on the hippocampus.

“The hippocampus is central to our everyday mental experiences,” says Maguire.

“In my team we are trying to explain exactly how and why it is so crucial for supporting memories of our personal past experiences. [It]helps us to inhabit our imagination, contemplate the future, navigate effectively in the environment and even influences our perception of the world.”