Aliens are coming – not all of them in peace

Unlike Florida, we don’t have to worry about a huge Nile crocodile turning up in our waters, but we are facing a threat from a range of non-native species 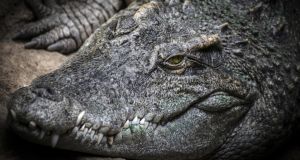 A Nile crocodile, which have been found in the Florida everglades. Photograph: iStock 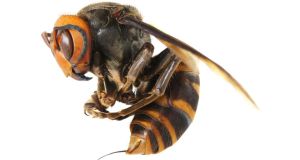 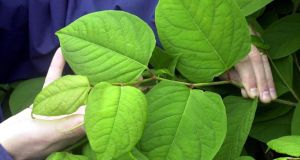 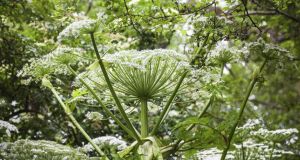 Beware: the giant hogweed, Japanese knotweed, Asian hornet, Siberian muskrat and killer shrimp are taking over. Ireland has endured many invasions throughout history, but these days we don’t have to worry about Viking or Norman armies landing on our shores.

We do, however, face a threat from a range of non-native animal and plant species, and if we don’t repel these invaders, we will suffer the consequences both environmentally and financially and, in some cases, in human costs.

In May, newspapers around the world reported on the discovery of four non- native Nile crocodiles in the Florida everglades. The Nile crocodile is larger than Florida’s native crocodiles and alligators, growing to 6m, and there are very few things it won’t eat – including humans. So far, they haven’t attacked anyone, but the news will have a few Floridians watching the water nervously.

Invasive alien species are nothing new. The giant hogweed, rhododendron and Japanese knotweed, for example, were introduced to England in the 19th century. But the Victorian botanists who proudly brought them home had no idea they were unleashing a hazardous material that would continue to cause headaches more than 150 years later.

The invaders drive off native species, choking up pathways and parklands and causing riverbanks to erode.

Giant hogweed is a serious threat to public health: its toxic sap causes painful burning, blistering, itching, lesions and scarring, and it is particularly dangerous to children.

Japanese knotweed won a gold medal at a major flower show in Utrecht, the Netherlands, in 1847, but it is too late now to take the medal back. The plant can cause huge structural damage to houses and buildings, driving up building and insurance costs and affecting property prices.

The threat of alien invasion is always there, so it is vital to track the distribution of non-native species in Ireland and beyond and to scan the horizon for what threats may be coming down the track, says Colette O’Flynn, invasive species research officer with the National Biodiversity Data Centre.

The centre relies on “citizen scientists” to send in details of their sightings, photographs and descriptions.

Hopefully, you won’t be spotting the Asian giant hornet, a highly aggressive species that threatens to wipe out native bee populations. It packs a highly toxic sting and has already been linked to the deaths of six people in France.

“We’re fortunate in that we’re an island out on the western edge of Europe, so we can get advance warning when something like that comes into Europe,” says O’Flynn.

“It’s probably something we don’t think will jump over to Ireland, but we’re keeping a close eye to see how it might move.”

The killer shrimp sounds like something from a B-movie, but if one of these voracious predators found its way into our rivers, it could play havoc with the ecosystem, says O’Flynn.

“A lot of these things, once they come over and get established, especially in the marine or freshwater environment, it’s next to impossible to get rid of them. It might not be technically feasible, or the cost implications could be disproportionate to its impact.”

The data centre has recorded sightings of a variety of non-native animals, including Siberian chipmunks, raccoons and American coati. And if you spot what looks like a giant man-eating rat, relax – it’s more likely to be a coypu or muskrat, both vegetarian rodents.

Our most famous non-native animal has to be the grey squirrel, which has driven its smaller cousin, the red squirrel, out of its natural habitats and brought a pox that has killed off many red squirrels. Oddly, we have documented evidence of exactly when they were introduced here.

It happened at a wedding party at Castle Forbes, Co Longford, in 1911, when six grey squirrels were presented to the bride and groom and promptly scampered off into the nearby woods. They are now established in 20 counties, mostly east of the Shannon, but, says O’Flynn, there are signs that the red squirrel population may be recovering, thanks to improved woodland conservation.

“Because we’re reforesting many parts of the country, and improving the health of the woodlands, the pine marten has made a comeback, and because grey squirrels are bigger than the reds and spend more time on the ground, it makes them easier prey for the pine martens.”

A PLAN FOR DUBLIN: UNIQUE CHALLENGE OF BUSY PORT
Dublin City Council has published its Invasive Alien Species Action Plan for Dublin City 2016-2020. It is the first local authority to adopt a formal long-term strategy for dealing with invasive species, says parks superintendent Maryann Harris, who co-ordinated the plan.

“We have to commit to this and agree that it’s a problem that we want to tackle,” says Harris.

As Ireland’s largest urban area, Dublin faces unique challenges in controlling and eradicating alien invaders, and species are assessed according to their risk status from a Dublin city perspective.

Along with Japanese knotweed (right) and giant hogweed, the highest risk species include sea buckthorn, which threatens habitats on North Bull Island National Nature Reserve and Irishtown Nature Reserve; Himalayan balsam, which contributes to increased riverbank erosion; and Nuttall’s waterweed, which blocks access on waterways such as the Liffey and can entangle boats, causing a safety hazard.

“From our point of view those are some of the most potentially destructive. They may have the most impact on people in terms of safety issues, or they can write off how people can use or enjoy their land.

“And they have a cost, even in terms of branding a city as clean and unpolluted, and having a high-quality environment so that people can invest in it.”

In a city of half a million people, with the biggest port in the country, there’s a lot of coming and going, which increases the number of “vectors” or pathways of invasion. The action plan sets out clear strategies for dealing with different invasive species, but it also recognises that some species have become so well- established, the best you can hope for is to try to ameliorate their impact.

“An example of that might be mink. At this stage we’re looking at how to control them rather than eradicate them,” she says. Their presence along the Dodder was discovered after nesting birds disappeared and the annual supply of ducklings vanished.