Alfred Russel Wallace developed a theory of evolution before Charles Darwin, but his humility and social activism may have cost him his scientific renown 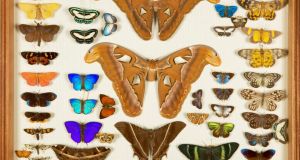 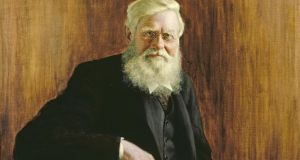 A detail of a portrait of Alfred Russel Wallace (1823-1913) by JW Beaufort. Courtesy of the Natural History Museum, London

At the end of June 1882, the man who revealed the theory of evolution visited Dublin to receive an honorary degree from Trinity College. One of the greatest scientists of his day, he had travelled widely in South America and southeast Asia and had prodigious knowledge of the world’s biodiversity. This is not Charles Darwin, though the two men’s lives sound similar.

In 1858, Alfred Russel Wallace discovered the mechanism of evolution, independent of Darwin. He had set off as a freelance collector of birds and insect specimens in the Amazon in April 1848, with an interest in the problem of how animals evolved from one kind to another. Ten years later, while in the Spice Islands, he nailed it: survival of the fittest. He noted how the weakest were weeded out and those with a slight edge proliferated.

The paper he sent, 10,000 miles to Charles Darwin, changed the course of history. Darwin abandoned his great book and published his more concise (500 pages) On the Origin of Species in 1859.

Recognition for Wallace has so dimmed over the years that some argue a great wrong has been done. “If there had been no Wallace, I think Darwin would have gone to his grave having failed to get his great book out,” says Andrew Berry, an evolutionary biologist at Harvard who has a special interest in Wallace. Berry says that Wallace deserves higher accolades because he co-discovered evolution, was also a great scientist, and vigorously engaged in political and social issues of the day. This year marks the centenary of his death.

“I am a fan of Darwin, he was an amazing man and scientist, but anyone who gets to know Wallace feels that there is an injustice here,” says Berry.

“His contributions in relation to evolution have been overshadowed,” says botanist John Parnell of Trinity College. “Darwin was a wonderful scientist and observer and was well-known, well-connected and well-established.” Wallace was never well-off. He was a self-taught naturalist – he left school aged 14 – who began with an interest in botany, then beetles of Britain, before journeying to two far-flung tropical regions. Collecting specimens paid his way.

“Apart from his collections, and the notes on them which remain very valuable, he probably knew more about animal distributions than anyone else of his time,” says Parnell. He has studied plant distribution in that part of Asia still today known as Wallacea, close to the famous “Wallace line” separating the lands of tigers and monkeys from the marsupials to the south.

The Irish Times reported on Wallace’s appearance at Trinity College, at the end of June 1882. The first name on the roll was the archbishop of Dublin, who was praised for his exquisite translations of Spanish poetry, as well as his own original compositions. Further on, Wallace was one of two scientists honoured, described as a naturalist whose “name also has been associated with that of Darwin in the discovery of natural selection”. Wallace recounted in his autobiography how he was flattered to be described as the friendly rival of Darwin, indeed “a second Darwin”, in Trinity.

A Victorian backpacker
While Darwin had journeyed as captain’s guest on the Beagle, a Royal naval ship, Wallace was the Victorian equivalent of a backpacker. His South American adventure ended in calamity. On the journey home, he ended up circling his burning ship in a lifeboat as it sank with the collections he had hoped would make his name. The crew drifted for 10 days before being picked up 200 miles off Bermuda.

Returning to London, Wallace opted to start over in the “Malay archipelago”. He first collected beetles on the island of Singapore, while avoiding the local tigers, and then took more than 90 trips, travelling 14,000 miles from Indonesia to New Guinea in eight years. He wrote a famous scientific paper from Borneo on a law that allows one species to change into another, but the “how” remained elusive. Word came back from London that he should stop theorising; he needed to collect more facts. But he was edging closer. Then, inspired by the variation he had seen between and within species, he formulated an identical theory of evolution as Darwin had, but kept it rather private for 20 years.

Today, Dublin city libraries hold dozens of copies of Darwin’s Origin of Species, but almost none of Wallace’s books. Parnell also notes that, the last time he checked, there were two portraits of Wallace in the National Portrait Gallery in London, and 43 of Darwin.

Why has Wallace’s star faded? In part it is down to Wallace, says Berry, as he always deferred to Darwin, describing himself as “a young man in a hurry”, and Darwin “the patient student”. Berry, however, describes what happened after Darwin received Wallace’s letter as highly irregular. Its arrival in June 1858 led Darwin’s friends to arrange for two papers – one by Wallace and one by Darwin – to be read before the Linnean Society in London that July; Wallace was not consulted.

“You send a paper to a colleague [Darwin] to look over and they publish your paper and put their paper first. It was questionable practice, though it’s clear it wasn’t Darwin’s idea,” says Berry.

Wallace was delighted, though, writing a letter home rejoicing in how this would ensure him “the acquaintance of these eminent men on his return home”. While Darwin beavered away at his home, it was later left to Wallace and others to defend evolution from attack (see panel). But Wallace was busy elsewhere, too.

“Wallace was socially aware,” says Parnell, “being against eugenics and very conscious of the potential impact that people can have on their environment, for example when he talks about the irreparable devastation caused by the reckless clearing of forests.”

The Natural History Museum in London is launching a family trail on July1st where kids can discover more about Wallace. See nhm.ac.uk