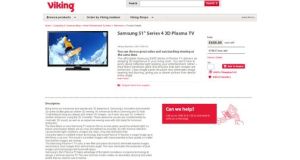 Viking Direct has corrected the mistake and will not be supplying televisions to customers who purchased at the incorrect price.

An online retailer accidentally priced a 51 inch 3D television for €6.49 instead of €649 last night.

The offer was online throughout Saturday and most of Sunday before Viking Direct disabled the purchase function, but not before several thousand orders were made.

However, punters who thought they nabbed a bargain will be left disappointed, as Viking released a statement this morning saying it is unable to fulfill orders placed for the television at the incorrect price. Customers who placed an order for the television will automatically be given a full refund.

“As per Viking’s terms and conditions, the company is entitled to cancel any order if the ordering web pages contain any error, including in relation to the description or price of any goods,” the statement read. “We are in the process of contacting those customers who placed an order for the wrongly priced television to advise them of the misprice and their impending refund. We would like to apologise to our customers for any inconvenience this has caused.”

The offer’s webpage was shared over 50 times on Twitter with people encouraging others to nab the offer before website administrators noticed. The initial price did not include VAT, which would have brought it up to a whopping total of €7.98.

University student Cathal Ronan attempted to purchase three of the discounted televisions after his friend received a call telling him about the offer.

“I thought it was worth a try. I was going to keep one, give one to my parents and probably sell the other one for around €500. I put it up on Facebook and after around 45 minutes it was taken down,” he said. “A friend of a friend tried to spend everything in his bank account to buy 162 of them.”