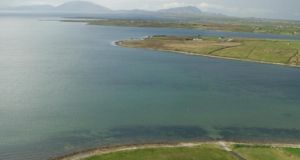 The Department of Energy has confirmed that it has been investigating reports of “sinkholes” or “depressions” on a north Mayo tidal estuary where the final section of the Corrib gas pipeline is being laid.

Shell E&P Ireland says it has informed “relevant authorities” of the occurrences during tunnel boring machine maintenance, which it says pose “no risk to public safety”.

The company says they are “not sinkholes” but are “shallow temporary depressions of approximately one to two feet in depth”.

However, residents living along the pipeline tunnel route through Sruwaddacon estuary – a special area of conservation (SAC) – say that some of the holes are up to three metres deep and three metres wide.

Unstable sand
Terence Conway of Inver and Shell to Sea said that when the hole occurs, the surrounding sand bears a “blue tinge” and is unstable.

Mr Conway noticed the first in a series of holes on May 20th, again on June 14th, and each day during this first week of July, at Aughoose.

The areas lies above where the 500 tonne boring machine – named Fionnuala by Shell after one of the Children of Lir – has been deployed to dig a 4.9km sub-sea tunnel.

“The contractors for Shell have staff out at 5am on the strand, raking over these holes, but no caution signs have been erected in spite of our requests,” he said.

Warn people
“This is a public strand, and so at one point we put up our own fence to warn people, but it was taken down,” Mr Conway said.

“Adults might be ok, but these are a risk to children. We were told we wouldn’t feel or see this work on the surface at the Bord Pleanála oral hearing nearly three years ago.

“We argued at the hearing that it was not suitable to try to dig a tunnel through an SAC, and one with the particular fluid subsoil here known as dóib.”

The Department of Energy said that the developer had notified it about “depressions in Sruwaddacon.

The department’s consultant tunnelling expert undertook a site review earlier this week, and the “depressions” were being “considered” in this context, it said.

“This involves the use of compressed air at the front of the machine to protect the workers and to maintain stability at the tunnel face,” it said in a statement to The Irish Times.