Refuelling and rendition: Ireland's role in the war on terror 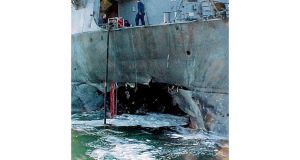 USS Cole, which al-Qaeda bombed in Yemen in 2000. photograph: afp/getty

A report this week by the Open Society Justice Initiative, a human-rights advocacy group, details the co-operation that 54 states, including Ireland, afforded the US Central Intelligence Agency in its secret rendition of terror suspects. Among the European countries most implicated in the CIA’s counterterrorism network are Poland, Lithuania and Romania, which allowed the US intelligence service to run secret prisons, or “black sites”, in their territories.

The report, Globalising Torture, provides evidence that Italy, Sweden, Germany and Britain assisted in extrajudicial abductions, participated in follow-up interrogations, or both. Belgium, Spain, Germany, Finland, Denmark and Ireland permitted their airspace and airports to be used for flights associated with rendition flights. Of the pre-2004 EU states, only France, Luxembourg and the Netherlands refused to participate.

By knitting together official sources, court documents and testimony gathered by humans-rights organisations, the report provides the clearest picture yet of Ireland’s role in the so-called war on terror.

Ireland regularly allowed flights associated with the CIA’s rendition programme to stop and refuel at Shannon in the years immediately after the 9/11 attacks. In the largest list compiled to date, the report identifies 136 detainees who were held or transferred illegally by the CIA. It links the apprehension and transfer of three suspects to aircraft and flight schedules that included stopovers at Shannon between 2002 and 2004.

One of the principal sources of evidence against Ireland comes from documents disclosed in a case brought by rendition victims against Jeppesen Dataplan, a US company that provided flight-planning and logistical-support services for CIA flights.

The documents, along with evidence compiled by Amnesty International, indicate the aircraft in which Khaled al-Maqtari, a Yemeni national, was transferred from Baghdad to a black site in Afghanistan refuelled at Shannon airport the day before his transfer.

Al-Maqtari was transferred to Afghanistan on January 21st, 2004, in a Gulfstream V jet, one of the aircraft the CIA uses most frequently for rendition. The evidence indicates the same jet had left Shannon airport on January 20th en route to Baghdad, where it collected al-Maqtari.

Al-Maqtari had been arrested by US forces in Fallujah earlier that month before being transferred to Abu Ghraib prison as an unregistered “ghost detainee”. In April 2004, he was moved to another secret prison in an unidentified country.

The report said he was held there in “complete isolation” for 28 months before being sent to Yemen, where he was eventually released without charge or trial in May 2007.

US court records from a case involving Richmor Aviation, another company that operated CIA rendition flights, show that at least 13 flights operated by Richmor involving US personnel landed in Ireland between 2002 and 2004. It’s unclear whether detainees were on board during these stopovers. However, Richmor-operated flights were involved in the extraordinary rendition of the Egyptian cleric Abu Omar, suspected by the CIA of involvement with radical Muslim groups.

In February 2003, as he was walking to his mosque in Milan, Omar was allegedly stopped by a police officer and asked for identification before being forced into a van and driven to a Nato air base in Aviano, Italy. From there he was flown to Germany and then to Cairo, where he claims he was tortured for seven months. He was eventually released by an Egyptian court that ruled his detention was “unfounded”.

In September 2012, an Italian court upheld in-absentia criminal convictions for 22 CIA agents and one pilot involved in Abu Omar’s abduction. Omar and his wife have also filed a petition against Italy before the European Court of Human Rights.

There is also suspicion that Richmor-operated flights refuelled at Shannon before transporting Abd al-Nashiri, a Saudi national whom the US believes masterminded the attack on USS Cole in 2000 and who remains in US custody at Guantánamo Bay. Captured by US forces in Dubai in 2002, he was taken to a CIA prison in Afghanistan, and then to Bangkok.

According to a UN report, on December 4th, 2002, the CIA transported al-Nashiri on a chartered flight from Bangkok to a secret CIA detention site in Poland. It is alleged that US interrogators subjected al-Nashiri to a mock execution with a power drill as he stood naked and hooded.

In its report, Open Society bases its evidence of Ireland’s complicity on three high-level reports from the European parliament, the Council of Europe and the UN that expressed serious concern about the country’s “alleged co-operation” in CIA renditions. “There is no doubt that high-ranking Bush administration officials bear responsibility for authorising human-rights violations associated with secret detention and extraordinary rendition, and the impunity that they have enjoyed to date remains a matter of significant concern,” it says.

“But responsibility for these violations does not end with the US. Secret detention and extraordinary rendition operations, designed to be conducted outside the US under cover of secrecy, could not have been implemented without the active participation of foreign governments. These governments too must be held accountable.”

Irish pack must expose the weakness in England’s backrow 07:00
Donegal facing stern test of their credentials at Croke Park 06:00
England v Ireland preview: Ireland’s revival to face its sternest test 06:00
162 students have competed in the 2020 Irish Times Debate 06:00
Rare chance for Dublin to shine at Croke Park as they host Wexford 06:00