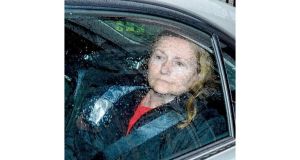 A hearing into veteran republican Marian Price and her fitness to stand trial, which had been listed for Monday, has been adjourned at the request of the prosecution.

Judge David McFarland has set aside March 13th and 14th for the new hearing to give a prosecution doctor time to examine the Old Bailey bomber, whose parole licence was revoked in May 2011 by the then Northern Secretary, Owen Patterson.

The Belfast Crown Court judge was told that given the condition of Ms Price (57), who tires easily and is being kept in hospital, the prosecution doctor estimated that his examination would take up to two weeks to complete, after which he would want to interview someone close to her before preparing his report.

The judge said that while this was a further delay, he had been told that matters were being resolved.

Ms Price, Stockmans Avenue, west Belfast, faces a charge of providing her mobile phone in March 2009, knowing or having a reasonable cause to suspect, it would or might be used for the purposes of terrorism. Her lawyer, Seán Devine, said those close to Ms Pricehad no explanation for her as to why this was not being advanced.

Tiger in the Bronx tests positive for coronavirus 07:14
Man killed in Co Tipperary assault 07:07
Boris Johnson spends night in hospital being treated for Covid-19 06:54
Tesla engineers show ventilator prototype on YouTube 06:46
Donald Trump says virus will peak in US in next few days 06:36