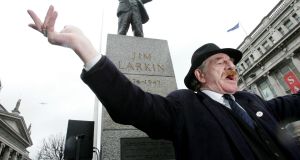 Actor Jer O’Leary, most famous for his portrayal of trade unionist Jim Larkin, has died. O’Leary, who had celebrated Christmas with his family, was found dead on Wednesday morning. He was in his early 70s.

The Dubliner from North Strand appeared in 42 films, making his film debut in Jim Sheridan’s My Left Foot.

Other roles included Michael Collins when he played Thomas Clarke and the King of the Tinkers in The Field .

He film credits also included In the Name of the Father, Braveheart, This Must be the Place and the fantasy series Game of Thrones .

As well as his acting roles he was a renowned balladeer, an artist and a folklorist. A skilled tapestry banner maker, he made many for trade union marches.

A committed trade unionist himself, he left school at 13, became a political activist and joined Official Sinn Féin before moving to the Communist Party of which he was a member for many years.

Over six feet tall, his first acting role on the Dublin stage was as Big Jim Larkin in The Non-Stop Connolly Show co-directed by Jim Sheridan and John Arden in 1975. And that role became an intrinsic part of his career, including graveside orations and performances at political and other events.

A family tragedy had a major impact on him when his son Diarmuid who was 22 died in a fire in a Glasgow guesthouse in 1998 just hours after he had watched his favourite team Glasgow Celtic win the Scottish premier League.

O’Leary had also attended the match but decided to fly home straight after the match. He was quoted afterwards saying “I met him by fluke as we filed out of the ground, he hugged me and said `Pass it on to my mammy and I’ll see you tomorrow’. Those were his last words to me and he went off to celebrate with his friends.’’

Editor of The Phoenix Paddy Prendiville said “he was the most entertaining and lovable character I ever met. He was by far and away the most popular person in Dublin. It will be a big funeral”.

Described as having an unselfconscious charm, O’Leary had a very wide circle of friends across all sections and was renowned for his sense of humour, particularly at his own expense.

Commentator Eoin Ó Murchú described O’Leary as “an absolutely larger than life character. He was deeply committed to the ideas of Irish freedom, Irish republicanism and the working classes”.

Mr Ó Murchú added: “He became so much James Larkin that the real pictures didn’t do the trick.”

O’Leary is predeceased by his wife Eithne and by his brother Denis. He is survived by his daughters Norah and Clare and by his sisters Margaret and Carmel.