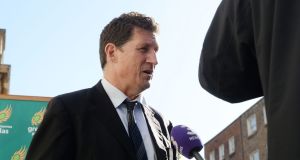 Facebook has agreed to share most of the data it has relating to advertisements during the abortion referendum campaign.

The social media firm had previously resisted providing the information, which will shed light on the extent of online campaigning in Ireland but, amid political pressure and with a Private Members’ Bill before the Dáil which would compel such ads to be traceable, it has agreed to do so.

The data is to be provided to the Geary Institute in UCD, which is working with the voluntary Transparent Referendum Initiative. Facebook is to work with UCD to produce a list of advertisers and aggregate data for the total spending.

Following reports that the No side was extensively advertising on Facebook and concerns from Yes supporters that online ads could swing the result, the company banned all foreign-funded ads for the remainder of the campaign. It declined to reveal the extent of spending or the rationale for its decision.

However, it now says it will share a list of Facebook pages associated with advocacy groups and the advertising and spending undertaken by these groups. It will also reveal how many ads it rejected following the ban on foreign ads.

The company says it will not be in a position to reveal 100 per cent of the data, but has undertaken to supply the vast majority – up to 95 per cent, sources say.

Unlike other countries, Ireland has no laws governing online campaigning during elections and referendums. While advertising, spending and campaigning are regulated and monitored offline under Ireland’s electoral laws, there are no laws or rules covering online.

Liz Carolan, founder of the Transparent Referendum Initiative, a voluntary group set up in advance of the vote which crowd-sourced examples of online campaigning and advertising during the referendum, said the move was a “good start” and would “partially fill a gap in knowledge that we will have no other way of knowing: approximately how much was spent on one platform during the referendum”.

“It won’t tell us about other platforms, or how much was spent by each group or even each side, the way that people were targeted, the data on which that targeting was based, the extent to which disinformation or manipulative targets were used, or the amount of spending that came from outside of the country,” said Ms Carolan.

She said it highlighted “yet again the failure to provide adequate guidelines, rules and accountability systems” in Ireland’s elections and referendums.

Green Party leader Eamon Ryan said that the move “sets an important precedent which should apply now in every future vote”.

He said that Google should now follow Facebook’s example “so we get a full picture of what went on during the recent campaign. The wild west days for unregulated online advertising are over.

“We want transparency about online political advertising so hidden funding does not distort the democratic process. What took place during the Brexit referendum and the last US presidential election cannot be ignored or allowed happen again,” Mr Ryan said.

Facebook supplied the text of the letter it sent to Mr Ryan, but did not comment further.