Villiers speech to determine if North talks can begin this week 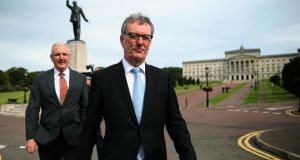 A House of Commons speech by Northern Secretary Theresa Villiers on Tuesday, outlining the basis for all-party negotiations to resolve political deadlock in the North, will determine if those talks can begin this week.

Ms Villiers and Minister for Foreign Affairs Charlie Flanagan held a series of bilateral meetings with the five main Northern parties in Stormont Castle on Monday in an effort to agree a basis for negotiations to resolve the impasse caused by alleged involvement of IRA members in the killing of Kevin McGuigan in Belfast.

However, both unionist parties – the Democratic Unionist Party (DUP) and the Ulster Unionist Party (UUP) – have yet to confirm if they are willing to take part in the talks.

After meeting with Ms Villiers, DUP leader Peter Robinson said his party would listen to her speech in parliament before reaching a conclusion.

The DUP has set out issues it says must be addressed before a basis for talks has been established. One of those, requested by other parties, is a body similar to the Independent Monitoring Commission that can ascertain the status of paramilitary organisations.

Mr Robinson said Ms Villiers was considering the matters raised by the DUP.

He said it was important for the DUP’s views to be reflected in the statement. “If not, quite frankly, we will have decisions to take as a party,” he said.

Mr Robinson said the key issue was the assessment of PSNI Chief Constable George Hamilton that members of the IRA were involved in the killing of Mr McGuigan and that aspects of its organisation still existed. He said that created a situation where business “cannot go ahead as usual”.

Ms Villiers said after the bilateral talks that all parties recognised that the most “urgent” issue was the need to “find a way forward so that intensive and focused talks can take place that lead to the full implementation of the Stormont House Agreement and address issues arising out of continued activity by paramilitary organisations”.

Sinn Féin Deputy First Minister Martin McGuinness reiterated his strong view there should be no preconditions to the negotiations. “If talks do not take place, or if talks do take place and there is no outcome, there should be an election,” he said.

Mr Nesbitt rejected Sinn Féin’s assertion that the IRA has“gone away”, notwithstanding the assessment by the PSNI Chief Constable that some of its members were involved in the killing of Mr McGuigan, although without the sanction of leadership.

“It was clear to us the secretary of state agrees with our assessment that Sinn Féin’s continual denial of the existence of the IRA is doing huge damage to the political process,” Mr Nesbitt said. “If there is to be talks, this I believe will kill or cure devolved government.”

He suggested there could be a role for the British National Crime Agency and statutory agencies in the South in tackling such crime. He also indicated his preference for a reactivated or new version of the Independent Monitoring Commission.

SDLP Assembly member Alex Attwood said the test for governments and parties was to “get back to the fundamentals of the Good Friday agreement despite the damage done to them over the last 10-15 years”.

Alliance leader David Ford confirmed his party would attend round table talks on Wednesday, but criticised parties who have not committed.