Varadkar to be questioned in Dáil over leak of document 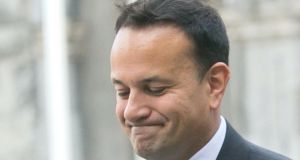 Tánaiste Leo Varadkar: has strenuously denied he broke any laws when he passed the document to the National Association of General Practitioners in April 2019. Photograph: Gareth Chaney

Tánaiste Leo Varadkar faces a Dáil grilling on Tuesday over his leaking of a confidential document last year, amid opposition accusations that he broke ethics laws and nervousness in the Government about potential future revelations.

The Tánaiste is likely to come under sustained pressure in the Dáil on several fronts. On Monday Sinn Féin described the manner in which he passed on a copy of a €210 million draft GP contract agreed with the Irish Medical Organisation to a rival GP organisation headed by a friend, Dr Maitiú Ó Tuathail, as a “scandalous breach of negotiating protocol”.

Rise TD Paul Murphy has lodged a complaint with the State’s ethics watchdog about the controversy.

Senior Government sources expect Mr Varadkar to survive the controversy, but there are some fears about the possibility of fresh revelations.

It is understood that the possibility of an inquiry, or a report into the affair, has not been discussed by the Taoiseach and Mr Varadkar, though sources said it may come on the agenda on Tuesday.

Speaking in Government Buildings on Monday, Mr Martin backed Mr Varadkar but added that the leaking of the document to the National Association of General Practitioners (NAGP) of which Dr Ó Tuathail was president “was not the best practice” and not the appropriate way to deal with a document.

There was more qualified support from the Green Party. Its deputy leader, Catherine Martin, indicated that its confidence in the Tánaiste would rely on a “full and frank” statement from him on the matter in the Dáil.

Sinn Féin, Labour and the Social Democrats are expected to focus on Mr Varadkar’s personal relationship with Dr Ó Tuathail, suggesting the leak is evidence of an “old boys’ network”.

It is also likely parties on the opposition benches will argue that the NAGP benefited financially or organisationally. They will also try to link the decision to a letter sent by the NAGP to Fine Gael warning that 2,100 GPs would campaign against the party in the local and European elections if the union was excluded from negotiations on the contract.

While Mr Varadkar has strenuously denied that he broke any laws when he passed the document to the NAGP in April 2019 – some days after the deal was reached with the IMO but before the document had been published – both Sinn Féin and Labour have sought legal advice on this point. Mr Varadkar is also likely to be asked on the floor of the Dáil whether he has acted similarly in leaking documents or information before.

A spokeswoman for the Standards in Public Office Commission confirmed that they had received a complaint from Mr Murphy. Mr Murphy has asked for an urgent examination of the circumstances surrounding the leak of the document.

It is understood that Mr Murphy’s request will be assessed to determine whether it constitutes a valid complaint. If the commission decides it meets the statutory requirements to allow them to examine the issue, a Sipo officer will be appointed to conduct a preliminary inquiry.

If the inquiry officer finds there is enough evidence to sustain the complaint, the commission could agree to conduct a full investigation which could result in public hearings on the matter.

The Cabinet is due to meet on Tuesday at 9am. One Cabinet source said they expected Mr Varadkar to address the issue at the meeting ahead of a statement later in the Dáil which the Tánaiste would deliver shortly after 4pm before fielding opposition questions.