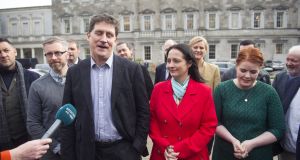 The chairs of two groups in the Green Party have resigned from their positions and left the party claiming they have been left “dismayed” by decisions taken since it went into Government.

Tiernan Mason has quit the Queer Greens and Tara Gilsenan has stood down from the Young Greens with both claiming they were “bullied and harassed” by party members and representatives.

They published a letter on social media, which says they have departed with immediate effect.

“We had hoped that we could fight to make a difference and to hold the Green Party to account, but in our short time as chairpersons, we have realised that our efforts have been in vain and that the concerns we have raised have been going unheeded,” they wrote.

“To that end, we feel that we are no longer able to represent these affiliate groups of the Green Party.

“While we understand the constraints that come with being the smallest party in a coalition, we have found ourselves dismayed to see our elected representatives vote against party policy, even outside the constraints of the Programme for Government, again and again.”

Unable to make a difference

The pair cited the party’s vote in support of allowing evictions during the Covid-19 pandemic and the sealing of the mother and baby home documents, and also criticised the “lacklustre” Climate Bill.

“We have not been successful,” they added. “We have been overlooked, left out, ignored, bullied and harassed by members and elected representatives of the party. Seeing as we are unable to make a difference we sought to, we are resigning with immediate effect.

“We would suggest to the remaining officials in the party hierarchy that you need to remember who put you where you are — those who voted for people and planet are outraged at your action.”

They signed off the letter warning that history will “not be kind” to the party as it stands.

Earlier this week, the Dáil passed legislation which allows a database created by the Commission of Investigation into Mother and Baby Homes to be sealed for 30 years.

The Green Party has been dealt a number of blows in recent months following its decision to enter a coalition with Fianna Fáil and Fine Gael, with some members leaving citing disillusionment with the party for entering Government with the two parties.

Signs of division emerged during the Coalition negotiations, but the deal to enter Government was approved by a majority of party members.

Minister for the Environment Eamon Ryan was re-elected as party leader in July after a closely run contest with his deputy and fellow Cabinet Minister Catherine Martin.

The Green Party has been contacted for comment about the resignations. - PA