Taoiseach did not say in NY he agreed with Trump ‘on anything’, adds spokesman 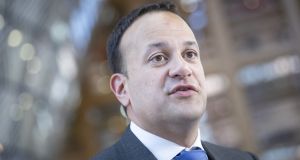 A free press is as important as the parliamentary or courts system in a democracy, Taoiseach Leo Varadkar said in response to controversy over his expression of sympathy with US president Donald Trump’s views of the media.

Mr Varadkar was criticised on Wednesday for his comments by media industry figures and opposition politicians. While he said he is in favour of a “free, fair and balanced media”, he did not address his expressions of sympathy for Mr Trump in the Dáil.

His spokesman later said Mr Varadkar did not say he agreed with Mr Trump in the comments he made at a lunch in New York.

Mr Varadkar made his remarks at a private lunch hosted by the Irish consul general Ciarán Madden for young Irish people working across a range of sectors in the city, including the media, finance and technology. There, he said political journalists were more interested in gossip in Leinster House than in the workings of Government.

Some of his Government colleagues, including Ministers, were privately critical of his sympathy for Mr Trump.

Mr Varadkar’s spokesman said: “The Taoiseach has made his views very clear on numerous of President Trump’s policies, whether that concerns immigration, gender, race, trade, multilateralism, the UN, Jerusalem and the Iran deal and other areas.

“The Taoiseach didn’t say he agreed with President Trump on anything, and that includes the media. His remark on ‘sympathy’ was that the President was willing to be critical, unlike traditional politicians, and that no group of people should consider themselves to be beyond reproach or immune from criticism. The Taoiseach explained this further in the Dáil.”

In the Dáil, Mr Varadkar said he “profoundly regrets” if “anyone in the country thinks I don’t respect journalism or a free press”. Sometimes there are tensions between Government and media, he said, adding that “at the same time it should not consider itself above criticism or beyond reproach”.

Fianna Fáil leader Micheál Martin took a swipe at the Taoiseach in a question about homelessness and housing. Mr Martin repeatedly said the media had very fairly and faithfully reported the Government’s housing announcements.

Mr Martin also said the Taoiseach was “quite notorious” as a minister for feeding journalists in Leinster House with gossip.

Sinn Féin leader Mary Lou McDonald cited Mr Varadkar’s reported remarks that “you were in sympathy with Donald Trump and you believed Irish journalists had no interest in the truth”.

She added that “you have attacked Irish investigative journalism and cited RTÉ in particular.

“You cite programmes that expose scandals” in hospitals, for carers and the failures of the Government to protect those in care, she said.

The Taoiseach claimed his only reference to RTÉ was specifically about the RTÉ Investigates programme Mission to Prey where he said false allegations about a priest fathering a child in Africa were made. Labour leader Brendan Howlin said: “The Taoiseach may believe that ‘a free, fair and balanced press is the cornerstone of our democracy’, but his deeds and moral leadership carry more weight.”

Green Party leader Eamon Ryan said if the Taoiseach really wanted a free and fair media, “you should help with funding [it]”.

Jon Williams, managing director of RTÉ News, defended its journalism and investigative reporting. Séamus Dooley, the Irish secretary of the National Union of Journalists, said the media is able to take criticism but Mr Varadkar’s sympathy for Mr Trump was questionable.