Varadkar not for turning on under-par senior public servants 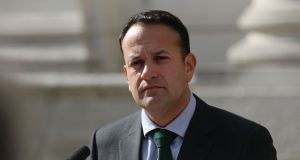 Taoiseach Leo Varadkar: “It’s the norm in many workplaces to step aside and to ask people to leave if they’re not performing.” Photograph: Stephen Collins/Collins Photos

Taoiseach Leo Varadkar has said the vast majority of public servants work hard but insisted senior officials who underperform should be asked to step down.

When he spoke to reporters at Government Buildings on Monday, Mr Varadkar was asked about his comments in an interview with The Irish Times in which he revealed he had told Ministers he would back them if they asked senior public servants to step aside.

“The vast majority of people in the public service, in the civil service, work very hard, they do an excellent job,” he said on Monday. We have good public services in Ireland as a consequence of that.

“However, in any workplace there are people who don’t measure up, who don’t perform, and it’s the norm in many workplaces to step aside and to ask people to leave if they’re not performing, and I don’t think the public service should be any different in that regard.”

Politicians had to step down from office “very often”, Mr Varadkar said. “And I don’t think we should be afraid to ask people in the public service in senior positions who don’t perform to do the same.”

Trade unions said on Monday they would have to be involved in any discussions about introducing new arrangements for dealing with public servants who are deemed to be underperforming.

A spokesman for the public services committee of the Irish Congress of Trade Unions said there was already an agreed system of performance management that applies to the civil service.

“That is a pretty robust system. So in the short to medium term why there would be talks about reviewing that or looking at that again, I really do not understand.

“I would be interested to hear about more about what the Taoiseach has to say about this. But whether he realises it or not, there is a robust system of performance management that already applies. “

Turning to the upcoming budget, Mr Varadkar confirmed on Monday that there would be some tax reductions for people on middle incomes in particular.

“The most important thing in the budget is going to be balancing the books and doing so for the first time in 10 years, and I think that’s very significant because we will be one of the few countries in Europe that’s able to balance the books,” he said.

Mr Varadkar said the mistakes of the past could not be repeated and balancing the books would ensure the State had some “headroom should we run into difficulty in the future”.

Clothing and footwear seized in Cameron Blair murder inquiry 12:16
Election 2020 outtakes: Vintage van and limo prove a stretch 12:14
Election 2020: ‘We all think the health service is a lost cause’ 12:04
Fianna Fáil’s pitch on health is strong on diagnosis yet less so on cure 12:03
Gardaí suspect botched murder attempt was bid to avenge Mulready-Woods death 11:56
SUBSCRIBER ONLY