‘High taxes on the middle classes are a barrier to opportunity and to work,’ says 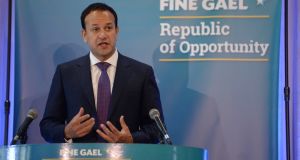 Speaking at his party’s annual ‘think in’ in Co Tipperary, Mr Varadkar vowed to create a new social contract with the principal that “everyone who can should make a contribution and everyone should benefit in return.”

The meeting is an annual pre-Dáil gathering to construct priorities ahead of the upcoming term.

Next month’s budget will be the first in ten years that will balance the books, he said, but stressed Fine Gael would not repeat the mistakes of the past.

Mr Varadkar said: “As Minister Paschal Donohoe has made clear we will do what is necessary to keep Ireland secure in a risky world. So we will keep public spending increases modest and sustainable.

“Where we have scope in the budget, it will be used to reward work and enterprise, and will benefit those on middle incomes who pay the highest rates of tax on far too modest incomes.”

Businesses, farmers and enterprise would be the priorities for Fine Gael and middle income earners would financially benefit in Budget 2018 by lower taxes, the Taoiseach outlined.

Mr Varadkar also confirmed he is pressing forward with plans to amalgamate the Universal Social Charge with PRSI.

“It is a complex and challenging task that will take many budgets but, when completed, it will mean having a new European-style social insurance system in Ireland. We’ve made a good start already with paternity benefit and new benefits for the self-employed.”

Minister for Finance Paschal Donohoe will discuss Budget 2018 this afternoon, while Minister for Housing Eoghan Murphy will give a presentation on the National Planning Framework and the capital plan.

The Taoiseach outlined his commitment to resolving the issues in the housing market and insisted Mr Murphy would announce a series of measures in this area in the coming weeks.

He confirmed the National Planning Framework and the ten year capital plan will be published at the same time and will demonstrate a commitment to sustainable investment.

Mr Varadkar added: “We will not introduce a planning framework, as Fianna Fáil did with the 2002 National Spatial Strategy, and then abandon it more or less immediately. We will not repeat the expensive mistakes of the past.”

On health, the Government supports the themes contained in the report by the Oireachtas committee on the future of healthcare.

Minister for Health Simon Harris will be given the full backing to implement the recommendations.

Mr Varadkar said: “I support the principles of the report: that of Universal Health Care, separating public and private practice, providing much more healthcare in the community, reducing out-of-pocket expenses and charges for patients, greater decision making at regional level, and a focus on public health.”

This is Mr Varadkar’s first significant speech to the party since elected as leader.

Taoiseach Leo Varadkar also criticised opposition parties for believing in a culture of dependency and victimhood.

He stressed the theme of his tenure in office would be creating a Republic of opportunity, which he insisted was not a PR slogan but a commitment to equality.

Fine Gael would pursue the politics of progress and change, he said.

The Taoiseach added: “So, when we say the centre must hold, we do not mean that things should stay the same. We mean that we will lead change not from the extremes but from the centre.

“Giving people, families and businesses the certainty with which they can plan for the future.”

The Fine Gael leader used the speech to criticise opposition parties - especially those on the left - preferring when their constituents are “down and dependent”.

“They want the system to fail so they can build influence and support.

“Fine Gael will never talk down to people. We will always try to offer people a way up and way forward.”