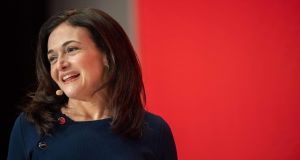 Sheryl Sandberg, chief operating officer of Facebook: The company announced plans last year to add a further 5,000 jobs to its Irish operation in the coming years, with a move to a new headquarters in Ballsbridge, Dublin. Photograph: Lino Mirgeler/AFP/Getty Images

Mr Varadkar wrote to Ms Sandberg three months ago, shortly after they met at the World Economic Forum in Davos, Switzerland in January. He told Facebook’s longtime second-in-command that he was “greatly encouraged to hear about Facebook’s positive experience of Ireland and to get a sense of your future plans”.

The Silicon Valley-based company announced plans last year to add a further 5,000 jobs to its Irish operation in the coming years, with a move to a new headquarters at the former Bankcentre campus in Ballsbridge, Dublin.

“The Government values Facebook’s investments in Ireland and assures you of our ongoing commitment to supporting a business-friendly environment,” Mr Varadkar wrote in his February 11th letter, released to The Irish Times by the Department of the Taoiseach under the Freedom of Information Act.

“IDA officials will continue to work closely with your executives here to realise your plans in Ireland,” he added.

The correspondence emerges weeks after an in-depth article in Brussels-based Politico Europe questioned whether the Government’s multinational-friendly economic policies made the country the right location for the pan-European regulation of social media giants, who were among the biggest employers in the State.

EU internet privacy rules introduced a year ago, known as the General Data Protection Regulation (GDPR), make Irish regulator the Data Protection Commission the European regulator for Facebook and other major internet companies because their European headquarters are based in Dublin.

Previously released correspondence has shown how Mr Varadkar’s predecessor Enda Kenny, who led the government between 2011 and 2017, had a close working relationship with Ms Sandberg.

According to an internal Facebook record released in March, Mr Kenny told Facebook executives at a private meeting in January 2013 that he “could exercise significant influence” during Ireland’s presidency of the EU in the first half of that year promoting Facebook’s interests on the reforms of EU data privacy laws.

Mr Kenny has not commented on the Facebook memo, which drew criticism that the Government had a cosy relationship with the internet giant.

“I enjoyed spending time in Dublin earlier in the week and was particularly glad to have the opportunity to share more about our continued investments in Ireland. As promised, I’m attaching a photo to give you an idea of what we’re planning for the new office site,” Ms Sandberg wrote in her email.

“I also appreciated your feedback on our ongoing efforts to strike the right balance between free expression and public safety. We are thinking carefully about this and will continue to engage constructively with your government.”

The email was copied to Martin Fraser, the secretary to the Government, Martin Shanahan, the chief executive of IDA Ireland and Brian Murphy, one of Mr Varadkar’s advisers.

Ms Sandberg had also sent an email to Mr Varadkar after they met in Davos a year earlier.

“We all continue to be grateful for the work your government does to make Ireland a great place for our European headquarters,” she wrote in the email dated January 26th, 2018.

“We will continue to invest in Dublin and look forward to growing our office over the coming year.”

An emailed response from Mr Varadkar four days later was heavily redacted by FOI Act censors at the Department of the Taoiseach, but refers to an “interesting” conversation the pair had in Davos.

“Let’s stay in touch as matters evolve,” said the Taoiseach of the unidentified subject matter.

A follow-up response from Ms Sandberg on February 1st, 2018 was also heavily redacted.

On the night of April 4th, 2018, Ms Sweeney sent the Taoiseach a detailed email informing him that almost 45,000 Facebook users in Ireland may have had their personal data compromised in the Cambridge Analytica scandal, and outlined the steps the company had taken to prevent it happening again.

“This represents 0.0516 per cent of the total number of people affected but any number is too many,” she wrote.

She concluded her email telling Mr Varadkar: “We would welcome your feedback on the steps we’ve announced so far and any suggestions you have on what more we should be doing.”