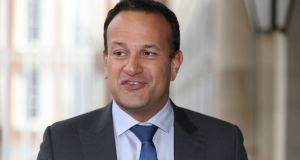 A delegation of German politicians gained a “greater and deeper understanding” of Irish concerns about Brexit having physically been at the Border , according to one of its members.

Politician Stefan Müller was speaking on behalf of the group of more than 40 Bavarian Christian Social Union members of the German Bundestag at the end of a three-day visit to Ireland.

The top-level German delegation held talks with Taoiseach Leo Varadkar along with a whole array of Ministers mainly about Brexit.

Every effort would be made to “avoid the re-introduction of a hard border” and ensure “what has been negotiated and captured in the withdrawal agreement will be honoured”, Mr Müller said.

With regard to trying to persuade Britain to change its Brexit stance, he said, “many German people failed to understand what they want to achieve”. “As long as we cannot ascertain what it is the British government pursues, it is very difficult to apply any pressure.”

Mr Müller said, “Germans have that sensitivity what it means to have a border separating two parts of one country.

“This is not to say that the border that was separating East and West Germany is comparable to the border between Northern Ireland and the Republic.

“We do appreciate what it means to people particularly in this Border region if such a border was to be re-introduced here on the island of Ireland.”

Asked about a no-deal Brexit, Mr Müller said it was in Germany’s interests to continue to have “smooth economic co-operation and trade between the United Kingdom and the European Union”.

It would be “fair to say we do expect and fear some impact on the economic outlook of various industries in Germany in case of a hard Brexit, not just car manufacturing. However, this will be determined by what trade agreements will be negotiated following whatever Brexit has come to pass and that, as yet, is unpredictable . . .”

The group rounded off its stay by travelling to see part of the Border at Carrickarnon that formerly was the main crossing point between Dundalk and Newry along the old Dublin and Belfast Road. They listened to presentations about the potential impact economically, on jobs and tourism and cross-Border relations, and the security and policing issues that a hard Brexit could give rise to.

The delegation was exchanging a visit the Taoiseach paid to their party retreat in Seeon in Bavaria at the beginning of the year to further bilateral relationships between the two countries.