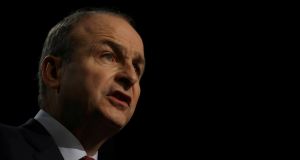 Fianna Fáil leader Micheál Martin described Fine Gael TDs as coming from more privileged backgrounds and of not having ‘that feel for working-class people,’ he said. Photograph: Reuters

Taoiseach Leo Varadkar has accused Fianna Fáil leader Micheál Martin of a “nasty” and “deeply offensive” attack on Fine Gael as a party of privilege.

Mr Martin’s remark about Fine Gael TDs was also “unbecoming of the kind of person who wants to be our Taoiseach”, Mr Varadkar said.

The Fianna Fáil leader told the Sunday Independent over the weekend that Fine Gaelers do not come from the same “milieu” as people in his own party.

“They come from a more privileged background and they never really had that feel for working-class people,” he said.

“Fine Gael have a huge sense of entitlement and they believe that they have a divine right to rule.”

“I think what Micheál Martin has tried to do, which is a really bad development in Irish politics, is he is trying to inject class conflict into politics,” he told RTÉ’s Today with Sean O’Rourke.

“He has been doing it now for a while, in terms of his attacks on us, and they’ve really escalated now.”

Mr Varadkar said people in Fine Gael came from all walks of life.

Outgoing Dublin North West TD Noel Rock is from Ballymun in north Dublin, Minister for Education Joe McHugh was brought up on a small farm in Co Donegal while Minister for Health Simon Harris is the son of a taxi driver and a special needs assistant, he said.

Speaking on RTÉ’s News at One, Mr Martin said: “Fine Gael from the outset, they flagged they were going to attack me from the very beginning. They have followed through on their promise, but it is not working. We are getting desperate type approaches from Fine Gael now, they are flailing about the place.”

The Taoiseach also said Minister for Housing Eoghan Murphy has been singled out for personal attacks.

“One of the unfortunate things we seen in politics in recent years – maybe it has always been there but I think it has got worse in recent years – is the extent to which politicians doing very difficult jobs become personally targeted for doing it,” he said.

“I think that is wrong. Eoghan Murphy is the Minster for Housing for two and half years – he certainly did not cause the housing crisis.

“It was caused by others a very long time ago. Under his leadership, the number of new homes being built in the country has more than doubled, house prices are levelling off, 15,000 people have been helped to buy their first home and at long last the number of people who are homeless is falling.”

But Mr Varadkar admitted he could not justify the current number of people who are homeless in Ireland.

“I can’t justify the fact that there are nearly 10,000 people homeless in our country – it’s not justifiable,” he said.

“It is stain on our society. It is an issue that the Government has worked really hard on the last couple of years.

“It arose out of our housing crisis and at long last we are starting to see some progress. No-one wants to see kids waking up in emergency accommodation or having to do their homework on a hotel bed.”

Fine Gael has embarked on the biggest social housing programme for years to deal with the issue, he said.

On the homeless man left seriously ill in hospital last month when the tent he was staying in on Dublin’s Grand Canal was lifted by an industrial vehicle during a clean-up, Mr Varadkar said he had not visited him and did not know if Mr Murphy visited him.

“My only regret about this is that it happened and my only concern is to make sure it doesn’t happen again,” he said.

Waterways Ireland and Dublin City Council are “reviewing their procedures to make sure it doesn’t happen again”, Mr Varadkar added.

Mr Varadkar said Fine Gael had made Ireland a more modern and compassionate country since it came to power nine years ago, and that electing Fianna Fáil into office would “mean going backwards”.

1 Coronavirus: Almost 100 staff and residents in one nursing home test positive, Dáil hears
2 Coronavirus: 13 more deaths in Republic with 402 new cases confirmed
3 Tributes to ‘stalwart’ of London-Irish community who died from coronavirus
4 ‘It’s Sinn Féin against the rest’: NI Executive in conflict over coronavirus
5 ‘Everyone still thinks it’s a joke’ - parents of toddler with coronavirus speak out
Real news has value SUBSCRIBE