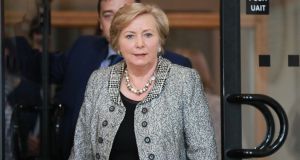 Responding to a UN committee’s findings which called for Ireland’s strict prohibition on abortion to be changed, Tánaiste Frances Fitzgerald said: ‘We have to take this very seriously. We signed up to this covenant.’ Photograph: Nick Bradshaw.

The Government will address the findings of a highly-critical UN report on Ireland’s abortion law through the framework of a citizens’ convention and a special Dáil Committee, Minister for Justice Frances Fitzgerald has said.

Responding to the UN committee’s findings which called for Ireland’s strict prohibition on abortion to be changed, Ms Fitzgerald said: “We have to take this very seriously. We signed up to this covenant.”

Speaking after a meeting of EU justice ministers in Luxembourg, she described the findings as “very stark finding” and “very serious”.

“Obviously it’s very disturbing to read about the experience of this woman who I think was courageous. It’s very hard to speak about personal issues like that.”

She said she believed the UN findings would “inform” the work of the citizens’ convention.

However, there has been no clarity as yet on when the convention will be set up or what its make-up will be. It is understood that is a decision for Taoiseach Enda Kenny, who will come under renewed pressure to make the position known.

He said: “I believe that the Government’s commitment to develop a consensus approach with a citizens’ assembly is the way to move forward, and today’s views from the UNHR Committee should clearly form an important part of this process.”

Groups campaigning for a repeal of the eighth amendment welcomed the report, while anti-abortion lobbyists criticised the UN’s committee’s intervention.

“For the first time ever, a UN treaty body has found that the illegality of abortion is, in itself, a human rights violation,” he said.

Executive director of the Irish Council for Civil Liberties Mark Kelly said the latest UN opinion had no direct legal effect in the State.

“However, it joins a chorus of expert voices reminding Ireland that its abortion regime is wildly out of kilter with abortion law and practice in the family of civilised nations.”

Ailbhe Smyth, convenor of the Coalition to Repeal the Eighth Amendment, said “substantial legislative and constitutional change” was now required for the State to become compliant with its international human rights obligations.

Gerry Edwards of Termination for Medical Reasons said Ms Mellet had shown “incredible bravery and selflessness in going public and taking her case to the UN Human Rights Committee to hold Ireland accountable for its punitive laws and ensure that women are no longer denied the ability to end their pregnancies in Ireland”.

However, the Pro Life Campaign said the UN’s Human Rights Committee had “become a de facto lobby group for abortion”.

Catholic Primate of All Ireland Eamon Martin said he had some difficulty with outside bodies telling Ireland what to do on abortion law.

The Archbishop of Armagh said it was a choice for Irish people, adding that the right to life trumped all other rights.

Tracy Harkin of the group Every Life Counts said the committee was “also adding hugely to the distress of families whose child had a life-limiting condition before birth as the committee is without question saying these children are unworthy of any legal protections and therefore have no inherent value”.