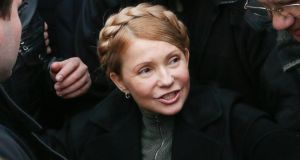 Freed Ukraine opposition leader Julia Tymoshenko, newly-elected Ukrainian prime minister Arseniy Yatsenyuk and Ukrainian opposition figure Vitali Klitschko are to attend the European People’s Party conference in Dublin this week, it has been confirmed. All three are due to address the conference which takes place in the Convention Centre, Dublin on Thursday.

Mr Yatsenyuk assumed the role of prime minister last Thursday following the ousting of Victor Yanucovich. A close ally of Mr Tymoshenko, he held the position of Economy Minister and Foreign Minister in Ms Tymoshenko’s government between 2005 and 2007.

Ms Tymoshenko (53) was freed from prison in Ukraine ten days ago after a law was passed in the Ukrainian parliament, paving the way for her release.

Mr Klitschko (42), a former professional boxer, has been one of the leading figures in the Kiev uprising.

Ms Tymoshenko’s Batkivshchyna party is one of a number of non-European Union parties that are a member of the European People’s Party, the centre-right political grouping in the European Parliament of which Fine Gael is a member.

The EPP is due to select its candidate for European Commission president ahead of May’s European elections. To date, three candidates have declared their interest in the position - former Latvian prime minister Valdis Dombrovskis, EU internal markets commissioner Michel Barnier and former Luxembourg prime minister and head of the euro group Jean-Claude Juncker, who is seen as the favourite, with the support of Angela Merkel’s CDU party. The candidate is expected to be selected by lunchtime on Friday.

As the Congress gets underway on Thursday morning, EU leaders will gather in Brussels for an emergency summit to discuss Ukraine, with most EPP leaders members expected to fly to Dublin directly from Brussels. The Taoiseach will hold a press conference with Angela Merkel in government buildings at lunchtime on Friday.

The conference is being hosted by Fine Gael, a founding member of the EPP which applied to host the congress last year.