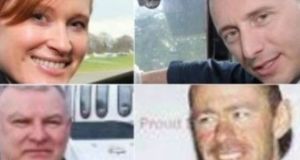 A preliminary inquest hearing into the deaths of the four Irish Coast Guard Rescue 116 helicopter crew has been deferred until later in March due to the severe weather.

The opening of the inquests had been set for Thursday in Belmullet, Co Mayo. However, weather conditions have affected travel to north Mayo, and coroner for north Mayo Dr Eleanor Fitzgerald has deferred the hearing until a yet to be decided date.

The bodies of Mr Ormsby and Mr Smith have not been recovered, in spite of extensive air, sea and shore searches.

The preliminary inquests are expected to allow for registration of the deaths of the crew, but it is expected that an application will be made for an adjournment due to the continuing investigations by the Garda, Health and Safety Authority.

The lead investigation by the Air Accident Investigation Unit (AAIU) is not expected to be finalised for some time.

A preliminary report by the AAIU published last April indicated that a chain of events led to the fatal crash. It identified deficiencies in an operator’s route guide, and an absence of data on Blackrock in the helicopter’s enhanced ground proximity warning systems (EGPWS), which is not a primary navigation tool.

The fact that none of the four crew were located by satellite beacons was also explored in the preliminary report, which found conflicting information on how the locator beacons were installed in lifejackets. This could have precluded them from activating – due to proximity of beacon to GPS antenna.

The pilots were flying on instruments at night from Dublin to the west coast, having been tasked to provide “top cover”, as in communication support, for the Sligo-based Irish Coast Guard helicopter which was undertaking a medical evacuation from a fishing vessel.

The R116 helicopter planned to refuel at Blacksod lighthouse on the Mullet peninsula, before flying west into the Atlantic, and was making an approach via Blackrock island when the crash occurred.