Trump’s Irish visit: ‘I don’t understand what he hopes to accomplish here’ 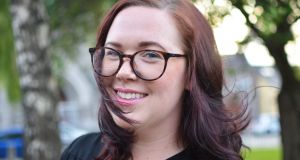 Margo Henkaus from Arizona, a student at Royal College of Surgeons Ireland. ‘I genuinely think that he thinks he’s going to be received well everywhere that he goes.’

US president Donald Trump will arrive in Ireland tomorrow for a brief two-day visit.

With a contentious presidential record, opinions on his performance both in the United States and beyond are divided. The Irish Times spoke to some Americans living in Ireland who have differing views on his visit.

Margo Henkaus, medical student at RCSI
To be honest, I don’t take Trump seriously as president. I just don’t understand what he would hope to accomplish here in Ireland. There are things being rolled back in the US that are being pushed forward here. I was here when I did my masters, and I was here when gay marriage was put in the Constitution and for Repeal the 8th last year.

Ireland hasn’t been great on helping their economy, but just recently, the country decided to revamp their efforts with a new commitment to climate change that’s coming out this month. It’s like all these things that Trump is going backwards against, Ireland is pushing forward for. They’re both going in opposite directions. So I just don’t really see the point of his visit.

I genuinely think that he thinks he’s going to be received well everywhere that he goes. For Repeal the 8th and the marriage equality vote, you had the majority of this country come out and vote in favour of these issues and that’s so opposite to what he’s preaching and what his administration is doing. I just don’t think he’ll get a super warm welcome.

Thomas O’Hara, former New York City police officer
I expected Trump as president to keep his promises, and he did. I honestly believed that he is going to be probably as good as, if not better than, Ronald Reagan. And I haven’t been wrong. I have five children who are hoping to go over to work in the United States, and the jobs are there now.

To me, this isn’t a visit. It’s not an official state visit. We already knew that. He’s going over to other parts of Europe because of the June 6th commemorations for D-Day.

He’s stopping off for a bit of a rest after a gruelling week and then he’s going to go to his hotel, he’s going to play golf, get back in the plane and go.

I believe there will be a state visit later on. I honestly believe he will win in 2020 and things will be exposed. People will start seeing the light. I think people will come around and see that all this man wants to do is make it so that America can be the best place in the world again.

Let the man play golf, and when he comes for a state visit, treat him like he was Kennedy, Nixon, or Reagan.

Larry Donnelly, lecturer, school of law, NUI Galway
I’ve been saying I think it’s important that he’s welcomed, but not with open arms. Open arms is suggestive of someone you support without condition. The president should be welcomed in a way that affirms the friendship, but Ireland shouldn’t be afraid to say there are areas where we disagree.

Some people, myself included, might not like Trump, but think it’s right for him to come here and believe we should celebrate the US-Irish relationship. I think their concern would be that we don’t want to jeopardise that. There are still tens of thousands of undocumented Irish in the US and there are a lot of Irish wanting work in the United States.

There are a lot of things riding here. The Taoiseach needs to be strategic and advocate as best as he can for Irish interest.

Seth Barrett Tillman: lecturer, department of law, Maynooth University
I think it’s very good for the president to be seen abroad. I think this president isn’t unhappy with or afraid of the fact that there may be large numbers of demonstrators and that he embraces such demonstrations.

There was this large orange balloon that was mocking the president in London, and Trump’s response was, “well they didn’t get a very good deal and they should have gotten a larger balloon for that amount of money”. That will be the way the president plays it here.

As far as European Union diplomacy, that’s going to be a sore point under Trump. Because Trump in my mind quite rightly sees the European Union as a larger and larger empire that excludes American goods through tariff walls in a larger and larger territory as the EU expands. Every time the EU expands and a new country enters, that’s another country in the EU customs union where American goods face a tariff and that’s a problem, and Trump sees that problem.

The fact of the matter is, whether we like it or not, Donald Trump is coming to Ireland but we can make our feelings known and we have that right.