Tory Brexit not the same as our ‘Lexit’, Boyd Barrett says 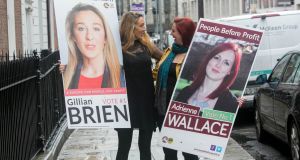 The Brexit being pursued by the UK Tory party is not the same as the British withdrawal from the EU which People Before Profit supported three years ago, TD Richard Boyd Barrett has said.

People Before Profit, which is an all-Ireland party, supported a so-called “Lexit”, or left wing exit from the EU during the British referendum on the issue in 2016.

At the launch of its campaign for the European Parliament elections, which take place here on May 24th, the group said one of its election commitments is “no hard border on the island of Ireland”.

It promises to “join a movement of civil disobedience to remove border posts if they are imposed by either the UK government or the EU”.

“A border between North and South will return us to the dark days of division and conflict. Peace in Ireland is more important than Tory nationalism or the EU single market.”

When asked if his party bore some responsibility for a hard border, if one is caused by Brexit, Mr Boyd Barrett said: “We didn’t get a Lexit, we got a right wing Tory Brexit which is trying to bring England on a race to the bottom. If they weren’t doing that, it would be relatively easy to solve the issues of the Border and so on. It is immigration and issues like that where we don’t have problem.

“Our criticism of Europe is that it is not generous enough to immigrants, that it its too corporate and it is not internationalist enough and that it is not fighting enough for social equality.”

Other key policy planks of the euro campaign include opposing “neo-liberalism and austerity”; building affordable housing and investing in services; opposing moves towards “further militarisation” of the EU; campaigning “against the gender pay gap”; improving democracy in Europe; pushing for Ireland to take the €13 billion from the Apple tax case and defending migrant rights.

Mr Boyd Barrett rejected suggestions that running two candidates in Dublin could split their vote and cost the left a seat in the European Parliament. Mr Murphy and Bríd Smith ran in Dublin in the last European Parliament elections in 2014 and the left lost a seat which had been won by Joe Higgins in 2009.

“Paul Murphy and Bríd Smith are both TDs in Dáil Eireann now so it worked out quite well in terms of strengthening the position of the left in Ireland,” Mr Boyd Barrett, a Dún Laoghaire TD, said.

“For us, elections are an opportunity to argue for radical change and to build campaign movements for change. We are not narrowly electorist, where everything is about who is getting the seat or who is getting the position. We want to use this campaign to radically challenge the political establishment and I have no doubt both our Dublin candidates are going to do that and it is going to strengthen the voice of the left in Dublin.”